The patient’s immune system and immune response also have a major impact on disease.

Most disease-carrying mosquitoes need a blood meal from an infected source that then needs to be transmitted with the parasite or the virus to the end recipient in order to transmit a disease. (Photo: Pixabay)

Most infectious organisms have an inherent cleverness, and are usually ahead of human endeavour. Every time we manage to pin down a virus, it will initiate a mechanism to elude that process. The immunodeficiency virus has eluded the collective might of the scientific community for more than 40 years.

Reams have been written about vector-borne diseases, more than on probably any other communicable disease in recent human memory. However, the problem with any discussion on vector-borne diseases is that it is like trying to define something that has an elastic condition. Hence, more often than not, the conclusions drawn are based on partial facts and conjecture. But the interpretable reality is somewhere in between.

What exactly are vectors? They are simply agents that transmit infectious particles from a source, which is either infected itself or is a symptomatic carrier of an infection. There are many vectors for infections and mosquitoes are just one of them. Again, not all mosquitoes have the same lethal burden of transporting disease to humans.

Most disease-carrying mosquitoes need a blood meal from an infected source that then needs to be transmitted with the parasite or the virus to the end recipient in order to transmit a disease. This is to simplify a more complex process, which is regulated and deregulated by a number of variables.

There are a number of enzymes, hormones and immune-based mechanisms that concentrate and lead to a disease, which is sometimes grievous in nature and sometimes fatal.

The thing is, every time you look at a virus or pin it down, it will initiate a mechanism to elude that process. This is true for other organisms such as malarial parasites as well, and over time, they will find a way to evolve and elude therapy, making such conditions partially and sometimes totally drug resistant. This is why some of the treatments that had an emphatic impact just about a decade ago, are no longer viable options. 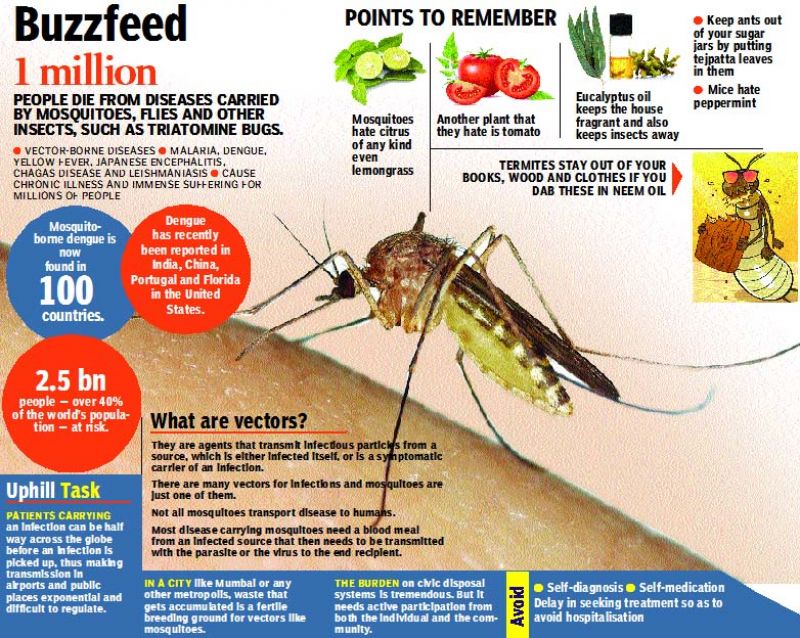 The patient’s immune system and immune response also have a major impact on disease. The immune system and its response dictate whether a person will make a recovery or endure complications. It is also the reason why genes that confer changes or mutations in the host, will either become active or up-regulated and sometimes become down-regulated, leading to partial or incomplete recovery from infection.

This is one of the reasons why viruses that are fragments of the original virus, such as Zika, are still able to be disruptive, since the most destructive elements transfer the RNA or the protein that carries the information, into a patient to cause a disease, in this case, deformities in the foetus.

So then the situation begs the question: Is it beyond repair or respite? Not quite, really. However, all such situations require an approach that is adaptive, innovative and clever. There are several complex aspects to the problem and so is the solution.

Our Planet Earth is now a global village without boundaries, and patients carrying an infection can be halfway across the globe before an infection is picked up. This makes transmission in airports and public places exponential and difficult to regulate.

In a city like Mumbai or any other metropolis, the waste that is accumulated is a fertile breeding ground for — among other scavengers — vectors like mosquitoes. The burden on civic disposal systems is tremendous. Hence, this is something that needs active participation from both the individual and the community, as a collective effort is the only measure that will deliver results.

Some of the commonly avoidable measures are self-diagnosis, self-medication and delay in seeking treatment. Patients are best advised to seek professional help at the appropriate time, since most infections if caught at an early stage can be treated as outpatients and hospitalisation can be prevented. As patients get older, it is important to understand how ageing affects your body and how different infections will make your body react. It is thus essential to have a robust immune system that takes the edge off infections and allows for a full recovery.

Finally, there are vaccine preventable conditions and adults require vaccines even more than children. In recent times, vaccines have been developed for dengue, which have shown encouraging results.

These are an amalgamation of measures that should be considered in the strategy to combat infections so as to be able to say: Quantum en me fuit (I have done my best!)

(Om Shrivastav is consultant of infectious diseases and immunology in Mumbai)