History is replete with instances of the havoc played by dehumanising language. 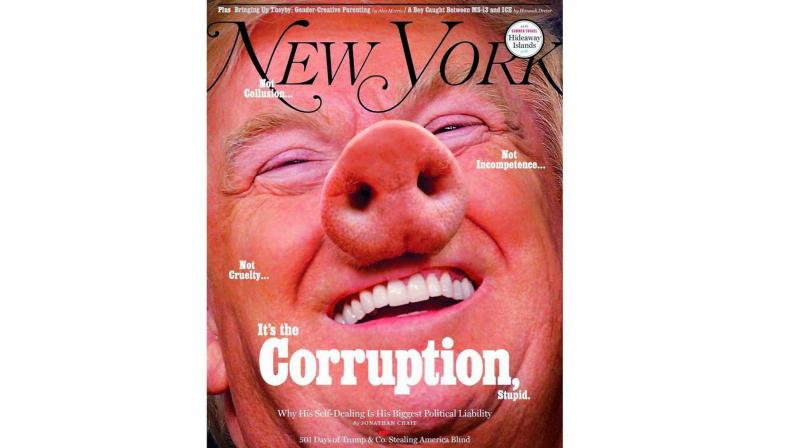 Trump has been a target himself: On the cover of its April 2 issue, New York magazine depicted the President as a pig.

Humanity is perched on a slippery course of dehumanising language, leading to a dent in compassion, revving up aggression towards fellow humans and fomenting violence.  The tendency to dehumanise other individuals and groups through the spoken and written word is a natural human trait, which is traceable as far back in history as we can know. It is important to deal with this very pernicious tendency and press ourselves and others to a path of mature social discourse. This message of sobriety and moderation needs to spread to other people so that it corrects social attitudes. History is replete with instances of the havoc played by dehumanising language. The worst part is that people use such language as if it is quite normal, oblivious to its potentially disastrous consequences.

Even as we reckon this to be a natural offshoot of human nature, one doesn’t know if people have it in early childhood, though there are some evidences of dehumanisation among children. One doesn’t know how much of evidence there is for this. But this natural tendency we see across cultures and populations. It is not unique to a specific group of people nor is it a specific perversion that some group pretty widely spread across the global population. It is true that dehumanising language conditions segments of society. It is not merely that we are doing these things but also that these are messages that we are carrying from media or from public figures or politicians and so on. Most of the research on intervention situation presents this like mass dehumanisation of certain groups.

When the United States starts alienating its workers, what we see is a number of people, even our President (Donald Trump),  using this type of language. I think it is potentially making a resurgence of something. Be vigilant about the extent you know within the US context if we are referring to immigrants or undocumented immigrants in a way that is dehumanising. Then it could have a large impact on the way the American public treats immigrants and that message is sort of being promoted to the extent he wants to. Hopefully, by drawing attention to it we can prevent that from happening, prevent the shift in the way people are thinking about immigrants and so on.

The tendency has been exacerbated by the social media. The way people seek to engage social media, especially twitter, one can quickly shoot off dehumanising messages just the way they are spoken. People who tend to speak ill find themselves exhibiting this sort of tendency quite naturally. People also like to group themselves into dehumanising associations. We can really quickly share with so many people and spread dehumanising and other patently problematic messages quickly and easily to billions of people all over the world. The published work that I have done has shown that among individual contacts we still have exchange of non-verbal messages, showing that people actually develop attitudes against other social groups based on such non-verbal message. Such gestures and messages are sufficient grounds to form biases within society.

(The author is a post-doctoral research associate in the Social Cognition and Intergroup Processes (SCIP) Lab at Northwestern University. Her research examines how prejudice is established, maintained, and facilitated through subtle messages present in everyday life. And how situational cues in our social environments shape our perceptions)
(As told to John Mary)