Entertainment   Bollywood  01 May 2020  Rishi Kapoor: Forever Bobby despite all those other things
Entertainment, Bollywood

Rishi Kapoor: Forever Bobby despite all those other things 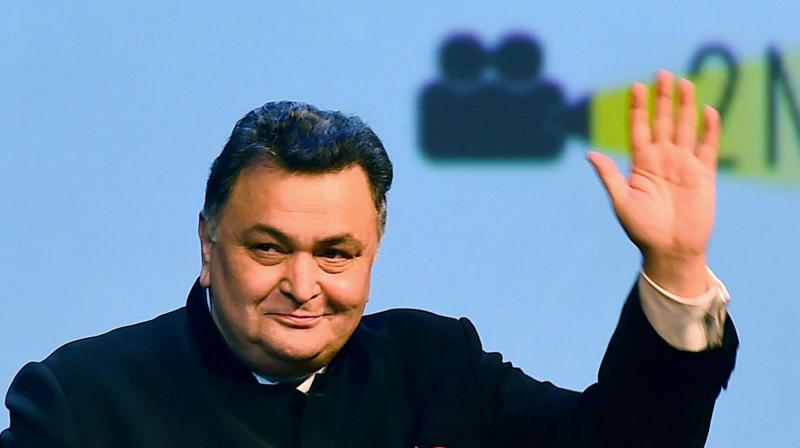 In this September 2, 2016 file photo, Bollywood actor Rishi Kapoor waves to fans at the inauguration of the BRICS Film Festival at Siri Fort Auditorium in New Delhi. Rishi Kapoor lost his battle with cancer and died in Mumbai on Thursday, April 30, 2020. (PTI)

New Delhi: The men of Bollywood’s Kapoor clan, with their Peshawari rosy cheeks and intriguing blue eyes, live life large but don't age well. Some of them die young.

Prithviraj Kapoor died in 1971 at the age of 64. His son, Raj Kapoor, keeled over and collapsed at an event in Delhi in 1988 where he was to receive the Dadasaheb Phalke Award. He was just 63. His son, Rishi Kapoor, died at 8.45 am on Thursday after battling leukaemia for two years. He was 67.

Rishi Kapoor was many things. A brattish boy born into the Indian film industry’s royal family and a naturally gifted actor who was at ease in front of the camera.

Rishi Kapoor the actor was entertaining and much loved. Many of us, now in our middle-age, grew up with, even on him. We loved his songs — from 'Om Shanti Om' to 'Ek main aur ek tu' — and danced liked him, because it was easy. The Rishi Kapoor playlist was about “dance aur romance ki masti”.

His guitar-strumming Monty (Karz) and his bike-riding rich daddy’s rebellious son Raja (Bobby) who got the girl everyone wanted were adorable. We liked that the top two buttons of his shirts were often undone, and loved his scarves and strange mufflers and sweaters. Many looked at his multi-coloured jerseys and pink lips on posters that were screwed to the narrow walls of autorickshaws and tried to copy his look.

His amour-propre (self-love), and the rich entitled boy air he flaunted, his flamboyance were infectious. Many wanted to catch it.

Rishi Kapoor acted in over 153 films, and yet it’s difficult to recall a scene, at least in his first innings — which is not a song or a dance sequence — in which his acting or dialogue delivery stood out. The only scene of his I recall admiringly is from his first film, Mera Naam Joker, when he peeps to look at Simi Garewal while she is changing.

Rishi Kapoor was fun, entertaining, prolific, but he was no one’s favourite actor. No one I know would list him as their No. 1 actor.

Rishi Kapoor got his first big break at the age of 16 when his father handed him the script of Mera Naam Joker (1970) over the dining table. As his mother, Krishna, negotiated with Raj Kapoor how he would juggle school and studies, Rishi dashed off to his room and started practising his autograph.

In his autobiography, Khullam Khulla: Rishi Kapoor Uncensored, he acknowledges his privilege: “I am Prithviraj Kapoor’s grandson. Raj Kapoor’s son… I am Rishi Kapoor. I was born lucky and stayed lucky.”

Three years after Mera Naam Joker, his father cast him in Bobby, a 1973 blockbuster whose influence — from the nation-wide sexual stirrings that a bikini-clad Dimple Kapadia caused to the desperate craving for the Rajdoot bike that Rishi Kapoor rode wearing a black leather jacket and a red scarf -- cannot be overstated.

But it was to Rishi's credit that he won the national award for his first role, and that Bobby became such a huge hit that his father finally managed to buy his own house for the very first time.

The film, inspired by Archie comics that Raj Kapoor was fond of reading, pushed up Rishi Kapoor’s price in those days to Rs 5 lakh and set the template for all star-kid launches. Kumar Gaurav, Sanjay Dutt, even Ranbir Kapoor, followed, but none could match Bobby’s romance, sexiness and moxie.

Rishi Kapoor’s filmography can be viewed in many ways, including a neat split between his first and second innings.

Though Rishi Kapoor stood out in some of these films, especially Karz and Doosra Aadmi, many of his romantic and memorable films were not carried by him -- they were either named after the female character, or the story was theirs, not his. Sometimes the women overshadowed him, and sometimes, in big-hit multi-starrers, he was cast in supporting roles, including, once, to a snake (Nagina).

The reason why it's difficult to recall a scene of his that stands out could be because Rishi Kapoor really was a natural, free of mannerisms, but there is also some merit in his grouse that scriptwriters those days wrote for action heroes, and most of those writer-backed roles went to Amitabh Bachchan. “This gave him an advantage over the rest of us who had to make our presence felt with whatever we got,” he wrote in his biography. And added grudgingly that Anthony (Amitabh Bachchan) never gave the Amars and Akbars their due, though his hits were their hits, too.

Fame was important to Rishi Kapoor, and recognition.

That recognition for his acting, the writer-backed roles he craved, he got in his second innings which he began in 2010 with Do Dooni Chaar. He went on to play some memorable characters in D-Day (2013), Mulk (2018), and finally out-shone Amitabh Bachchan in 102 Not Out.

This was also the time when he came into his own as a chronicler of his time, of Bollywood, politics, cricket, the Kapoor khandan, especially his father, through tweets to his 3.5 million followers, and his entertaining, anecdotal, frank autobiography.

Rishi Kapoor often had Twitter spats, including some while he was under treatment at hospital, he criticised the Gandhi family, batted for the BJP and ruffled feathers when he said that he was a "beef-eating Hindu."

Khullam Khulla tells many stories, including of the Kapoor family whose "tryst with the Hindi film industry" began with Seeta in 1934, after a nudge from Rabindranath Tagore.

Rishi Kapoor writes of his loving mother, his pampered upbringing, his father’s drinking and dalliances, his fear of his dad and their formal relationship despite their several collaborations. He also writes of his own drinking, temper, tantrums, depression when Qurbaani beat Karz at the box-office just five months after his marriage to Neetu Singh in 1980 and his love for his family.

The characters Rishi Kapoor played on screen may have been uncomplicated, pleasant and predictable, in real life he was a temperamental, crabby man. But since he was a Kapoor, he was also, always, entertaining, on and off screen.

What comes through in the stories he tells in his book is a boy who craved attention. Growing up, Rishi Kapoor barely saw his father, except to hear him babble in drunken stupor at night.

Perhaps it was his father’s absence, perhaps it was the weight of the legends in his family. Whatever it was, Rishi Kapoor forever remained the baby of the Raj Kapoor family. Later, as he moved out of his parents’ home, Neetu Singh replaced his mother, and he replaced his own father.

“My father is a straight arrow,” writes Ranbir Kapoor in the foreword to his father’s book, and goes on to be candid about their formal relationship. “Sometimes I wish I could just pick up the phone and ask him, ‘Dad, how are you doing?’ But we do not have that. We do not have a phone relationship,” he writes.

Rishi too is candid. He writes of his father’s affair with “Nargisji”, and later, how his mother once moved to Natraj Hotel on Marine Drive because of Raj Kapoor’s affair with Vyjayanthimala.

He writes about this “drop-dead gorgeous Parsi girl called Yasmin Mehta” and how, after she dumped him, he would get drunk and make his then co-star Neetu Singh “telephone Yasmin and try to cajole her into talking to me”.

What followed was Neetu and Rishi's five-year courtship. “The best thing that ever happened to me… was that I got married to a man called Rishi Kapoor,” Neetu Singh writes in the afterword in Rishi Kapoor's autobiography.

It is the most disturbing chapter in the book. She talks of walking on egg shells around “Bob” all the time, his possessiveness, suspicion, jealousy, and admits to knowing of his “passing attractions” and “a couple of trespasses”. She writes that she knows about them because he would get drunk and babble to her about the women.

It is to Rishi Kapoo'sr credit that he didn’t edit her story.

There is love and an admirable acceptance and dignity in Neetu Singh's voice. There is also the troubling image of a man whose passing will leave a huge void, but may also set some family members, who loved him dearly, free.

In the note that Neetu Singh put out after Rishi Kapoor’s death on Thursday, she wrote, “He remained jovial and determined to live to the fullest right through two years of treatment… Family, friends, food and films remained his focus and everyone who met him during this time was amazed at how he did not let his illness get the better of him… The doctors and medical staff at the hospital said he kept them entertained to the last.”

There it is again, love and admiration for the perennial entertainer.