The actor reveals that he could also be a murderer in the suspense thriller starring Sidharth Malhotra and Sonakshi Sinha. 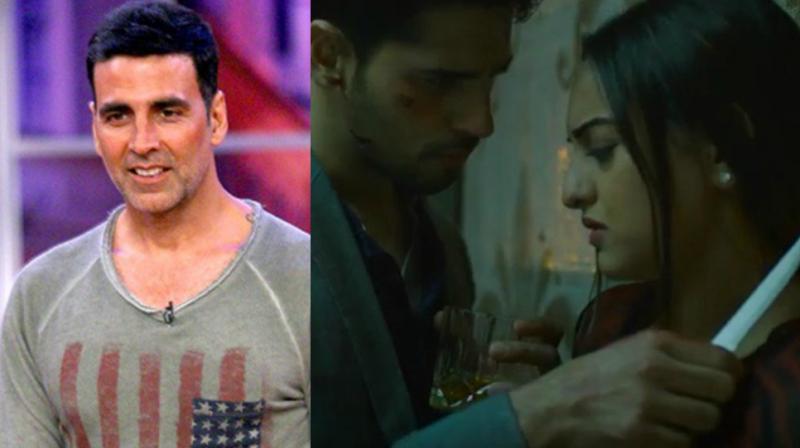 Akshay Kumar is close friends with the leads of 'Ittefaq', Sidharth Malhotra and Sonakshi Sinha.

Mumbai: While host of celebrities record special videos for Akshay Kumar's films, the superstar also ensures that he returns the favour.

Once such case was his ‘Brother’ Sidharth Malhotra for whom he had shot a special video for his film ‘A Gentleman’.

But for his upcoming ‘Ittefaq’, Akshay has not just promoted the film, but gone one step ahead and also shared an important message.

In a video on Twitter, the actor revealed how, considering the murder mystery genre, it was important that fans should not reveal the suspense after watching the film. While urging fans, he also revealed that it’s possible that even he could be a murderer in the film.

He said, “Friends, there’s a film ‘Ittefaq’ releasing on November 3, which is a vantage point murder mystery, a suspense thriller. There’s my brother Sidharth Malhotra, my heroine Sonakshi Sinha and my close friend Akshaye Khanna. I request you to please be careful about this film. While we should take care of every film, but this one especially because it’s a suspense film. After watching the film, please don’t reveal who is the murderer, whether it is Sidharth Malhotra, Sonakshi Sinha or Akshaye Khanna, and it’s even possible that I’m also there in the film and even I could be the murderer. So guys don’t be a spoiler, don’t give out the suspense.”

Thanks a ton @akshaykumar for doing this! For requesting everyone to NOT reveal the spoilers!!! Thank you my friend....#IttefaqThisFriday pic.twitter.com/ryNCS8JBnQ

The team of the film have been on a ‘no-spoiler’ campaign for the film with Shah Rukh Khan, Karan Johar and Sonakshi Sinha also posting videos to spread the message.

Khamosh to all the spoilers coming your way. Watch #IttefaqThisFriday at a cinema near you and #SayNoToSpoilers #Khamosh #ittefaqnov3 pic.twitter.com/aEjc3d5UOs

‘Itefaq’, directed by Abhay Chopra, is a remake of the Yash Chopra 1969 film of the same name starring Rajesh Khanna and Nanda.