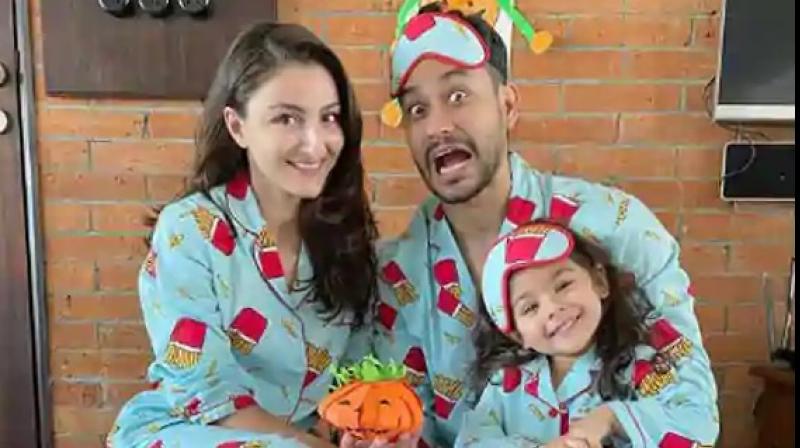 Many Bollywood biggies were in the mood for some ghostly dress-up and make-up to mark Halloween Day on October 31.

Kareena and Saif Ali Khan’s little one, Taimur Ali Khan Pataudi seemed to have a blast at home with his cousin Inaaya Naumi Kemmu. Kareena and Soha even shared images of the whole ‘spooky’ evening, which show Taimur playing with balloons and Inaaya making her own Halloween decorations.

Soha also shared a family picture from their Halloween celebrations, in which Soha, Kunal and Inaaya are seen wearing identical Halloween-themed night suits.

Another Bollywood family that celebrated Halloween was Neha Dhupia, who dressed up her one-year-old daughter Mehr as a witch. The Singh is Kinng actress also shared pictures and a video of her little girl having fun in the costume, which was apparently sent by her friend Soha on behalf of her daughter Inaaya. Mehr is seen wearing a black vest and a pair of jeggings, with a Halloween-themed black cape. “‘Witch’ one would you chose ... #trick or #treat ... #happyhalloween .... thank you Inni ‘boo’ for this @sakpataudi (sic),” Neha’s caption for the post read.

Apart from the toddlers, Aamir Khan’s daughter Ira Khan had some fun with makeup for Halloween, sharing a video on her Instagram stories, in which she is seen wearing a black jacket and half her face in quirky black makeup.