Entertainment   Bollywood  01 Dec 2016  I don’t like to be a part of B-town’s rat race, says Vidya Balan
Entertainment, Bollywood

I don’t like to be a part of B-town’s rat race, says Vidya Balan

Vidya Balan talks about how box office numbers don’t matter to her. 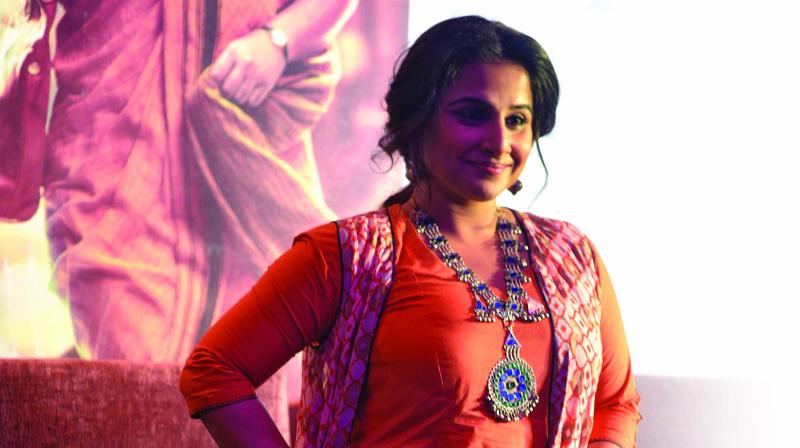 National award-winning actress Vidya Balan can be counted among those global celebrities who make you want to be more yourself —  unabashed, unapologetic and original. Her thoughts have always been worth paying attention to and during her recent visit to the capital, it was interesting to hear her talk about her unstoppable drive to pursue her dreams, not falling for stereotypical notions about leading ladies, the changing landscape of movies and more.

Age no bar
The leading lady is not the one to shy away from her real age at any given point. She explains that there is nothing wrong with ageing. “A woman’s career doesn’t stop after she gets married or after she has children. So, that’s going to be true even in films. Why should it be any different for female actors? I’m a proud 37-year-old,” shares Vidya who is all set to return to the silver screen with Kahaani 2. She adds, “Moreover, like it is said, ‘Age is an issue of mind over matter. If you don’t mind, it doesn’t matter’. One shouldn’t worry about it too much.”

Number game
“Box office numbers do not matter to me. But having said that, when and if a film doesn’t do well, I don’t let it take over my mind space. I get angry, I grieve, I go on, on a ranting spree but I make sure that I take it out of my system as soon as I can. Unless I do that, I don’t think I can move ahead,” shares the actress whose last four films flopped in the past. She adds, “Moreover, I don’t like to be a part of the Bollywood’s rat race aiming for stardom and box office numbers. I have never compared myself to anyone or compared anyone to me. I just want my films to do very well. But I don’t get hung up if they don’t. I feel thrilled about the work that I am doing…ups and downs are part of one’s career. I get satisfaction from my work. I am living my dream of being an actor. I feel blessed.”

Films and society
“Films influence society and society influence films and I think more and more movies are being made to prove the same. And don’t mistake my aforementioned saying limited to just arty cinema. Out-and-out commercial movies too can entertain, spread a message, make you cry and laugh at the same time. Writers get inspired by real life people and from real life incidents. And when those changes are happening in society it’s bound to be seen on screen,” shares Vidya about the changing landscape of Indian cinema.

Bollywood has evolved
“The definition of entertainment,” The Dirty Picture star says, “has changed and opened up. It’s no longer just about singing and dancing. I had joined the movie business about 11 years ago. And I have seen this industry change right in front of my eyes. When I started to do films like Ishqiya and No one Killed Jessica, they were considered aberrations. But now if you see around, it’s not just about women-centric movies. It’s overall the content, which has gotten better, wider, broader, bolder and experimental in nature. I feel the industry has evolved, in terms of scope and treatment.” She also says that there are more performance-oriented roles being written for the actresses now. “The kind of roles that we’re getting has changed immensely. I think the horizon has widened.”

Bonding with children
Even though the actress has never confirmed about her wish to start her own family, but she says that she has learnt how to handle kids now. “I used to be scared of them earlier. No, no, I think they used to be scared of me. Whenever they used to see me, they used to cry. But after my sister gave birth to two twin babies about five years ago, I started knowing them well. Now I can safely say that I bond well with children. I understand them and I am quite good with kids.”