The veteran actress was present to see her daughter give her first shot for her debut film directed by Shashank Khaitan. 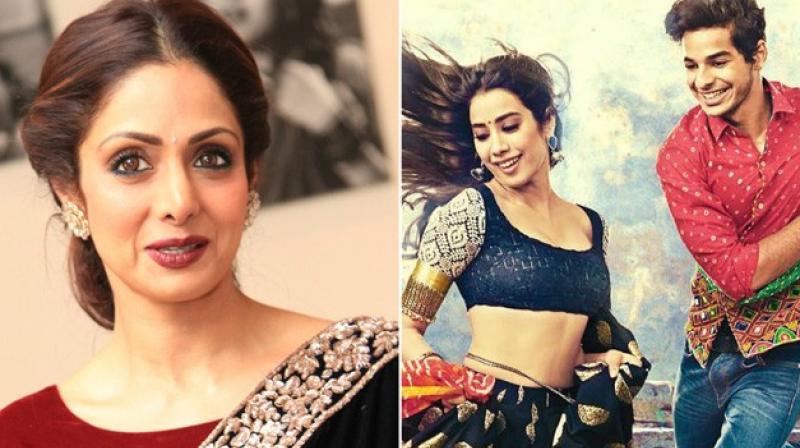 Mumbai: Sridevi's daughter Jahnvi has kicked off the shooting of her debut film 'Dhadak', opposite Ishaan Khatter, produced by Karan Johar and directed by Shashank Khaitan.

The confirmation of the cast and the title with the revelation of the first look few weeks ago made headlines galore and the film finally went on floors on Thursday, with the director Shashank Khaitan sharing a picture of the script on Instagram.

However, the shooting of the film started on Friday and Sridevi was among those present at the location in Udaipur, Rajasthan.

In one such picture, he is seen posing for a selfie with the two actresses.

He also shared a picture of the two debutants posing in a fun way while being 'reprimanded' by the director Shashank Khaitan, famous for directing 'Dulhaniya' franchise before.

Manish also shared a selfie video from the sets, focusing on the the banks of a river, a temple and a huge idol of Shiva.

#udaipur on the sets of @dharmamovies #Dhadak #director @shashankkhaitan with his young actors #ishaankhattar and #jhanvikapoor Having Fun posing for my camera ...trying to pose as a strict director and the two young actors pretending to be scared ... 😊

Earlier in the day, Karan Johar shared a picture of his new leads along with the clapboard of the film.

New month, new beginnings. #Dhadak begins to beat as @shashankkhaitan starts rolling for the film with Dharma's newest talent, @janhvikapoor and @ishaan95 in #Udaipur. Send them your love in the comments below! 🙌🏻 @karanjohar #ApoorvaMehta @zeestudiosofficial

‘Dhadak’, also produced by Zee Studios, is releasing on 6 July next year.