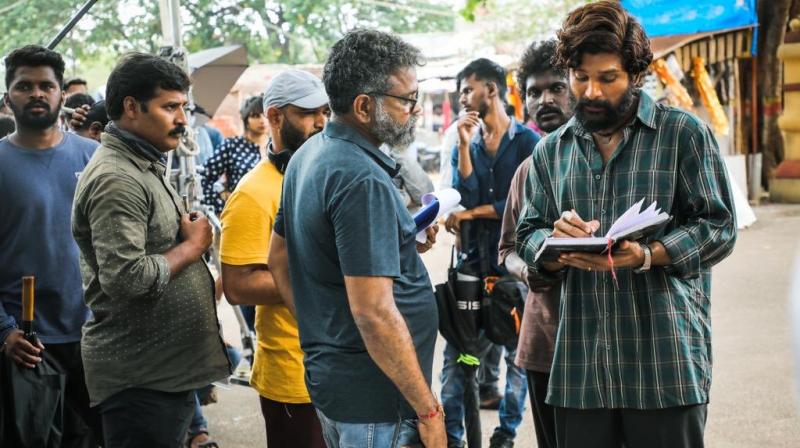 Allu Arjun with director Sukumar on the sets of his latest movie Pushpa: The Rise. (Photo: Twitter/@PushpaMovie)

Mumbai: Actor Allu Arjun says he has received an offer to star in a Hindi film but his fans up north will have to wait.

The 39-year-old actor, whose latest Telugu film Pushpa: The Rise has grossed Rs 300 cr worldwide since its release on December 17, said he is open to the idea of working in a true-blue Bollywood movie provided the project is exciting.

I have got an offer but nothing concrete or exciting. Hopefully soon (it will happen). It does take courage, you have to risk it (to work in another industry), Arjun told PTI.

Son of noted producer Allu Aravind, the actor is known for films like "Bunny", "Arya", "Desamuduru", "Parugu", and "Ala Vaikunthapurramuloo", among others.

After spending about two decades in Telugu film industry, Arjun said he is not interested in playing second fiddle to another actor when he takes up a Hindi script.

When we are the protagonist of the films that we do, anybody who comes to us will only come with the offer to play a protagonist, I would not be interested in anything (else). And it is very well understood.

Even the other person will not come and it doesn't make sense to ask such a big star to play a second role as it damages the film, they also know it. You have to work as a protagonist, as a main lead, he added.

The actor is happy with the glorious run of Pushpa: The Rise, which has collected Rs 56.69 crore from its Hindi-dubbed version.

Directed by Sukumar of Arya fame, the action drama was also released in Tamil, Malayalam, and Kannada languages.

Meanwhile, Arjun's 2020 action-drama "Ala Vaikunthapurramuloo" is being remade in Hindi as "Shehzada" with Kartik Aaryan in the lead.