Sanya Malhotra raised the interests of her followers by posting a picture with the rap sensation Naezy aka Naved Shaikh. 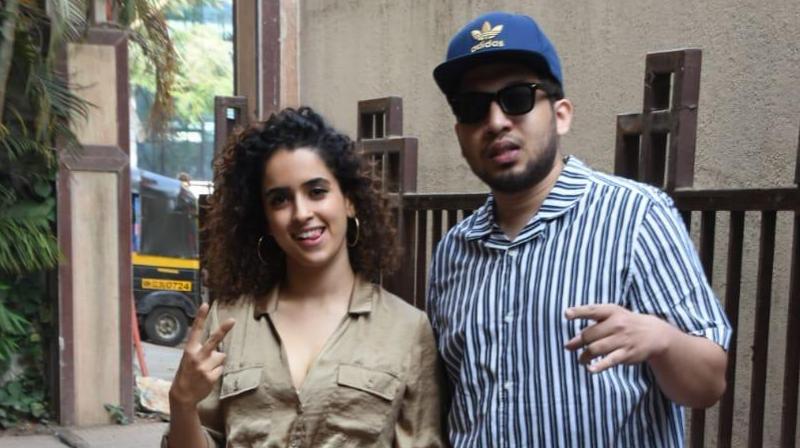 Mumbai: Recently, Sanya Malhotra and Naezy left the fans wondering what was cooking between the two, after they shared pictures together on social media. Putting an end to the excitement, Sanya Malhotra shared a video dancing to the tunes of Naezy's Aafat Waapas.

Indicating something cool coming up, Sanya Malhotra raised the interests of her followers by posting a picture with the rap sensation Naezy aka Naved Shaikh. The actress, now, surprised her fans with a dance video putting to display her electrifying dance moves to the foot-tapping beats of the rapper.

Hailing from two different fields of entertainment, the two artists presented a volcano of energy in the video and were seen having a blast doing so!

Sanya Malhotra has been formally trained in dance and is an avid performer, proof of which is seen on her social media. The actress posts a lot of fun dance videos on her Instagram handle, which are inspiring enough to choose it as a form of workout.

Here's how fans reacts to Sanya and Naezy's video:

Heyy dear Sanya Malhotra really awesome. I ❤ you. What superb performance. I just love it. pic.twitter.com/gPoKrI8Gmo

The Dangal Girl, Sanya Malhotra you are amazing! pic.twitter.com/e2ykN4QHCb

You are looking so beautiful Sanya Malhotra you're great a star and I am a big fan of you pic.twitter.com/yQ0O3yeiXn

Recently, garnering acknowledgment and appreciation from across the globe, Sanya Malhotra has been listed as 'Berlinale Breakouts: 5 talents to watch' owing to her path-breaking artists after the screening of her films at international film festivals.

Sanya last shared the screen with Nawazuddin in the critically acclaimed Photograph. The actress will now be next seen in Anurag Basu's upcoming film.