The film is a remake of the Kannada hit Ondu Mooeya Kathe, but has been only adapted partially. 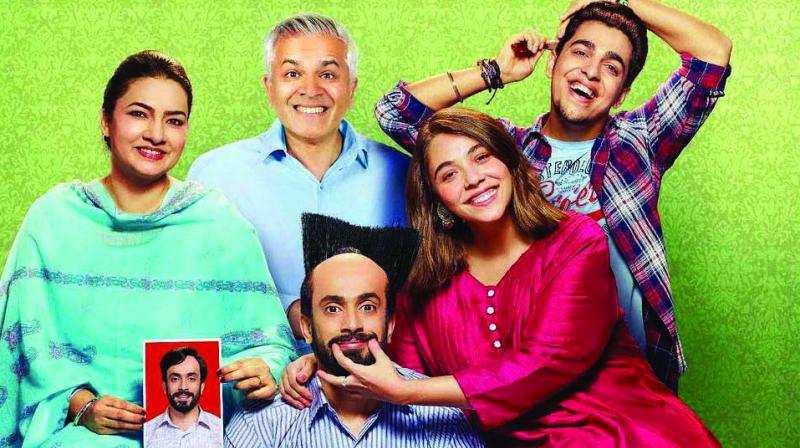 The past decade or so, we have seen quite a few Hindi films in which a personal anomaly, a disorder, or an ailment has been the focus, that too, of the lead character.
Rating:

What does a 30-year-old man do when he gets to know that his fast progressing problem of alopecia (or unpredictable hair loss) could lead to his remaining a bachelor all his life? He panics, of course. But is there any hope, or any remedy that would bring some semblance of happiness in his life? Director Abhishek Pathak’s directorial debut Ujda Chaman is about a bachelor Chaman Kohli, who is a Hindi lecturer in a prestigious college in Delhi, and suffers from premature balding, but is in the quest for a beautiful wife. The two have to be juxtaposed to let you know that the film written by Danish Singh and Raj B. Shetty is all about a young man trying hard to find a suitable bride for himself. Despite his “problem” in place!

After facing several rejections as a prospective groom because of his baldness, Chaman (Sunny Singh) hits rock bottom when an astrologer (Saurabh Shukla) spells doom for him, and pronounces a deadline to either find himself a girl or remain celibate forever. His parents (theatre actor Atul Kumar and Grusha Kapoor) are worried stiff too, and so is his younger brother (Gagan Arora), who gives emotional trauma to him even as he struggles hard to come to terms with his insoluble problem.

The rest of the film is all about Chaman’s struggle at the workplace, his pride collapsing at his sense of rejection by young girls, and eventually his self-discovery and acceptance.

That Chaman is striving hard to deal with his lack of confidence is what one gathers right off the bat when Chaman and his family are shown visiting a typical Punjabi middle class family in West Delhi’s Rajouri Garden. They are virtually thrown out for not letting them know about Chaman’s receding hairline. He is shattered and must do something. He tries to find himself a solution by visiting a hair transplant clinic where the astronomical damages in terms of a huge fee make his head go for a spin. His idea of sporting a wig elicits only laughs from his students, making him a laughing stock.

Now, this was one opportunity for the writers to come up with a script that could have just floated on the changing tides of time, social stigmas, values and taste, and still remained relevant and hilarious. Instead, what we have is a muddled story populated with thinly written characters which are wasted and are over the top.

When Chaman wants to go on a date and invites a fellow lecturer (Aishwarya Sakhuja) for a coffee, he is further hurt when she rejects the offer, and he takes it personally. There are other instances too that knock him out to the extent that he almost gives up hope.

Finally, when his fortunes turn around as he finds a pretty girl, Apsara (Maanvi Gagroo), but he seems to be under acute distress over her overweight issues. The introduction of a character who is otherwise fine but is seemingly unfit for him looks too contrived, and is clearly something to rub it in — that everyone has some drawback or the other. In yet another track, the director forces his moral code on us by making Chaman befriend his college peon who it seems is too contented and blissfully cheerful because of his spouse and her concern for him.

The film is a remake of the Kannada hit Ondu Mooeya Kathe, but has been only adapted partially. Chaman may not be perfect but wants a girl who has to be picture-perfect. His confused state of mind and his rejections point out a grave flaw in his own character. How I wish the film had dealt with that part of his psyche in its 120 minutes of runtime.

Whether it’s his lack of self-assurance, or his targeting Apsara for not being the most ideal match, the film’s narrative recedes from other sensitive issues that are most vital to such men. In a story where there is a larger challenge to not allow prejudices and stereotypical representations of men and women, the screenplay doesn’t allow itself to steer towards an end where some of the questions could have been answered. Ultimately, wasn’t Pathak trying to tell us that it’s our inner being that matters the most? Our physical attributes don’t makes us human, and remain superficial.

The past decade or so, we have seen quite a few Hindi films in which a personal anomaly, a disorder, or an ailment has been the focus, that too, of the lead character. As an instant recall one can count Gone Kesh, Dum Laga Ke Haishya, which may be very different from this film. But adding a certain irregularity to the lead actress’ role, the character — particularly Bhumi Pednekar’s in the latter — adds enough spunk to her which even gives her strength to counter personal jibes at her.

All those who may want to look for something relatable in the story will be sorely disappointed. And the ones who want a laugh-riot will be annoyed at the juvenile jokes and quite unintelligent and dim personal snide remarks being passed off for comedy. One also felt sad that an actor of Atul Kumar’s calibre is reduced to playing a loud-mouthed father. Kapoor as his wife too is over the top. Movies on such subjects can turn out to be tricky productions, more so, since just a week before we had to endure the same saga. But Bala, next week’s film, has the current flavour of Bollywood Ayushman Khurrana in the lead.

Hopefully, it will pass muster.