Doing a masala Hindi film not my sensibility: Freida Pinto

The next month will mark a decade of Slumdog Millionaire, which made the then-debutant actress an overnight star. 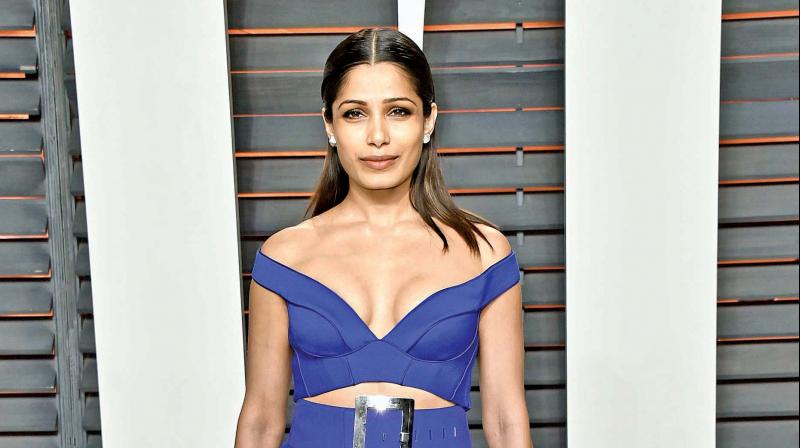 In Andy Serkis’ Mowgli: The Legend of the Jungle, the eponymous character who is brought up amongst wolves finally gets a mother figure in Messua, played by Freida Pinto. This is probably the first version of The Jungle Book that will have an Indian character and while her role in the film is brief, Freida is excited about the Indian context as the original story by Rudyard Kipling is set in India.  “I am always looking at the value addition my character will bring to the story as opposed to just being in a lot of scenes and doing nothing,” says the actress as she sits for a chat during the promotional tour of the film. She adds, “When I select a script, I am not looking at how many pages the character is on. If you take the character out of the script, will it continue to function normally? For me, it's really about whether the character makes a difference in the story. If it does make a difference, then it is worth playing.”

Serkis’ adaptation of The Jungle Book has been in the making for a while. Using the technology of performance capture, he has essayed the friendly bear Baloo’s role while Christian Bale is the noble Bagheera. Freida has worked with both and when she came to know that her Rise of the Planet of the Apes co-star was directing the flick, she offered to take it up. “I have grown up watching an animated version of the story but I actually read it during my college days. Since then, I have read it a couple of times and every time, I had had different emotions. Similarly, every director has their own version when it comes to The Jungle Book and I was on board with Andy’s interpretation. I loved what he was creating. He keeps it loyal to the emotion,” she adds.

The next month will mark a decade of Slumdog Millionaire, which made the then-debutant actress an overnight star. She went on to feature in Rise of the Planet of the Apes, Michael Winterbottom's Trishna, Desert Dancer and the recently released Tabrez Noorani's Love Sonia, to name a few. Ten years on, she doesn't feel like an outsider in Hollywood anymore. “There is nothing wrong in being an outsider as long as you don't feel abandoned or want somebody to lean on. Because the outsider's perspective is quite a vantage point. You get to see what is happening that in turn helps you to be more informed.” Part of it also has to do with the fact that Hollywood has woken up to racial inclusivity. “I don't know whether every Indian actor who does work in Hollywood or the international film industry can suddenly say that I am being accepted but the fact that they are working alongside their Hollywood counterparts is in itself praiseworthy - because they have broken a certain boundary that wasn't possible to overcome at one point in time. But after saying all this, I feel: You can have 10,000 actors go to Hollywood, but if they are not going with a story that's worth telling, there's no point.”

When asked about her upcoming projects and whether she plans to feature in a Bollywood film, the actress is quick to add that running around trees is not her sensibility. “I will never do a masala song and dance kind of a film but I will be a part of Indian stories such as Love Sonia. It's not my sensibility and if I can't be confident in what I do, it doesn't serve the audience. I'm not cut out for that and I don't feel apologetic about it.” But the Immortal actress also feels that India is definitely pushing the boundaries, attempting something new when it comes to storytelling. “Things that we wanted to do for a very long time but we didn't have the infrastructure to support it. I feel that it is happening now and it is becoming even more visible to us because of digital platforms such as Netflix. Without them, films such as Love Sonia or shows like Sacred Games wouldn't have been possible,” she concludes.