Harvey Weinstein was expelled from the Academy of Motion Picture Arts and Sciences. 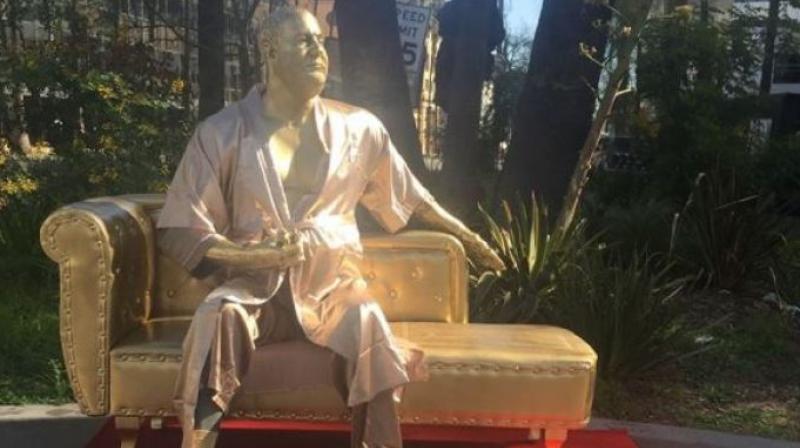 Mumbai: Days before the 90th Academy Awards ceremony, a silk robe-swaddled golden statue of Hollywood producer Harvey Weinstein, holding an Oscar and sitting on a golden chaise couch was erected on Thursday.

The statue, called "Casting Couch," is located near the Hollywood Walk of Fame, and is collaboration between street artists Plastic Jesus, popularly known for his yearly Oscar season installations that take aim at the dark side of show business, and Joshua "Ginger" Monroe, the artist behind the well-known naked Donald Trump statues.

The sculpture was deliberately made to allow passersby to sit beside Weinstein and take memorable pictures with him. Clenched in Weinstein's right hand is an Oscar sculpture, intentionally placed near his groin.

According to the artists, the Weinstein sculpture took almost two months to be crafted.

Jesus, explained on social media the impetus behind the sculpture.

"Harvey Weinstein became an icon in the entertainment industry. His power and influence was almost without compare," he tweeted. "However, whilst many thought the 'casting couch' was a thing of the past it was clearly still a part of the Hollywood culture."

The Hollywood Reporter quoted Ginger, who has said, "The whole couch and the entire image it gives off was to me a visual representation of the practices and methods that are used in Hollywood with these big powerful people. They have money and power to give jobs and they use that for their own sexual gratification and there's no better way to visualize this than the way we did with the casting couch."

"To be able to knock the monster down a peg and poke fun and ridicule it helps remove its power. That's how you take these powerful people down. As Mark Twain once said, 'Against the assault of laughter, nothing can stand," he added.

Weinstein, has been accused by number of women of sexual misconduct, including rape.

He was fired from the company that bears his name, banned from the Producer's Guild of America and expelled from the Academy of Motion Picture Arts and Sciences.