With the veterans' '102 Not Out' gearing up for release, even their sons got into the groove for the film. 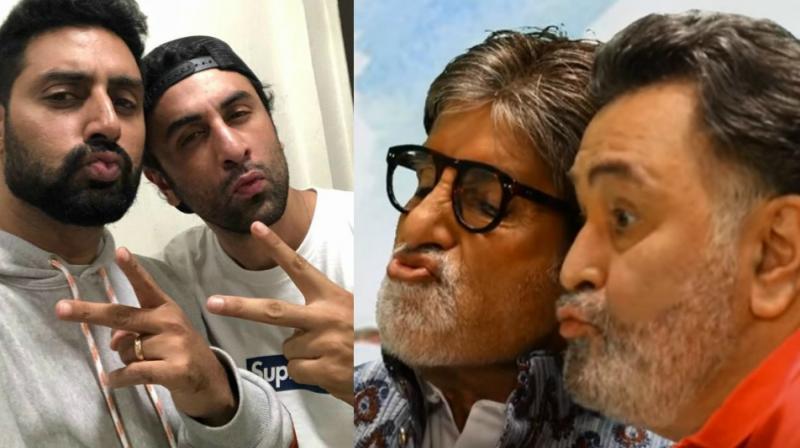 Abhishek Bachchan-Ranbir Kapoor and Amitabh Bachchan with their respective pouts.

Mumbai: Gone are the days when people would just flash their smiles or display their teeth while posing for pictures.

The social media-savvy, selfie-loving generation doesn’t adhere to the mainstream and would rather stick their tongues out or bring their ‘duck faces’ on for a pout.

And the pout has undoubtedly been a Bollywood favourite with Karan Johar, Kareena Kapoor Khan, Alia Bhatt, among others some of the famous exponents of it.

But it’s not just the younger generation who is taking to the popular pose, but even the veterans, as displayed by Amitabh Bachchan and Rishi Kapoor recently.

The Akbar and Anthony are reuniting on screen after 25 years in ‘102 Not Out’ and playing a father-son duo unlike brothers or friends they played in their previous films.

Their camaraderie is not just limited as seen in the trailer but even in one of the promotional videos where they are seen pouting together.

Their sons Ranbir and Abhishek recently came together at a screening of the film and proved that they are not any lesser as far as the pouting game is concerned.

Abhishek took to Instagram to share the picture and seemed proud and humble at the same time, by writing they were ‘trying to do’ what their fathers successfully managed.

Yo! What they (the fathers) can do, we (the sons) try to do too. #102notout #fathersandsons #ootd @amitabhbachchan @chintskap #ranbirkapoor #mustwatch #pout

The camaraderie between Abhishek and Ranbir, as seen at their various charity football matches, brought back memories of the former recreating the famous ‘Sholay’ scene with Bobby Deol in  ‘Jhoom Barabar Jhoom’.

We hope AB Jr and Ranbir bring out some of this chemistry in a film as well.