Vicky has gone down on his knees and proposed to his ladylove Ankita in the most romantic way. 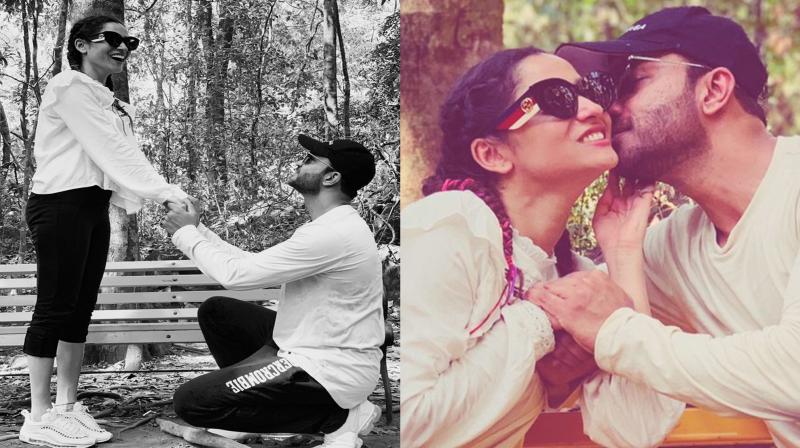 Mumbai: Bollywood actor Ankita Lokhande and her business boyfriend Vicky Jain's relationship is now talk of the town. Ever since the couple's kiss video had gone viral on social media, fans are extremely curious to know about their relationship updates.

Recently, Vicky has gone down on his knees and proposed to his ladylove Ankita in the most romantic way. Ankita shared these adorable moments on her Twitter handle.

I will think about it😛😛😛😛😛 pic.twitter.com/BZqLoz4I1X

In the picture, Ankita can be seen standing next to Vicky and no wonder she is blushing like the queen of his life. However, Ankita's reply to his proposal is quite surprising. While sharing a moment, she wrote, "I will think about it😛😛😛😛😛"

Well, this is indeed funny and interesting. Meanwhile, Ankita and Vicky have reportedly bought a huge and posh 8 BHK flat in Mumbai suburbs. A source told Bollywood Bubble, "Ankita is planning to settle down because she’s in the happiest phase of her life with Vicky. They are deciding on a particular date for the big wedding but sometime around December this year or January 2020 is what they are looking at. The apartment is getting ready and the lovebirds will move into their nest soon after they get married. Both the families are also happy with their union."

Interestingly, Ankita confirmed her relationship with Vicky by kissing him at a party. The video had gone viral on social media.

Meanwhile, Vicky Jain is a businessman from Bilaspur. He also co-owns the Mumbai Tigers team of the Box Cricket League. On the other hand, Ankita was earlier dating her Pavitra Rishta co-star and Bollywood actor, Sushant Singh Rajput. However, after dating for 6 long years, they broke up.