'Badla' presents the story of a woman struggling to find out the truth about the murder and blackmail. 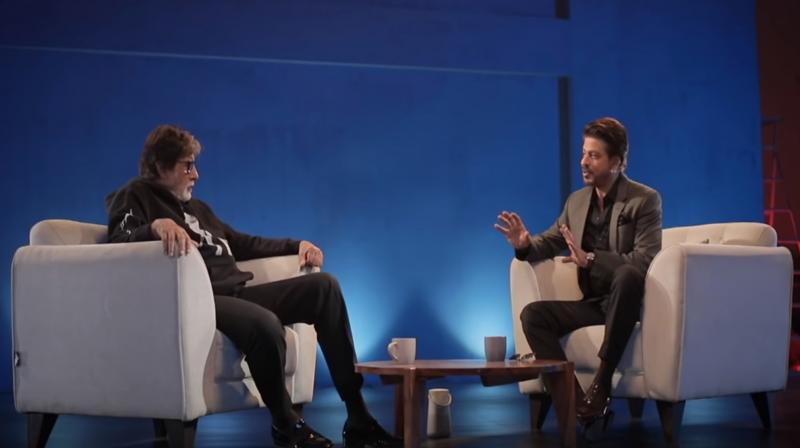 Mumbai: Veteran actor Amitabh Bachchan and Superstar Shah Rukh Khan came together to present the first episode of Badla Unplugged ahead of the film’s release.

As Badla hits the screens this Friday, actor Amitabh Bachchan and producer Shah Rukh Khan had a candid chat discussing the film provides insights into the crime thriller.

The intriguing teaser of Badla that released recently have created much excitement among the audience making them curious and amazed to witness two legends in one frame.

Ever since the first episode released, it has been garnering immense adulation from the audience having massive viewership across quarters.

The episode is a complete stunner as the two stars are sharing screen space after a long time treating the audience with the duo sharing witty talks to reviving old memories from their experience in the industry.

Like always, sharing screen space after a long time. Amitabh Bachchan and Shah Rukh Khan are not missing a single chance to entertain the fans but continue to make fans stick to the screen when Amitabh Bachchan revealed a new poster of the film, which was his favourite one from the film.

Surprising the audience with the first ever episode of the crime thriller drama of Badla, the makers will soon launch the second episode of the film. Watching two brilliant stars unplugged, this series of witty videos would also act as a great promotional activity for the movie, which is soon to be released on 8th March 2019.

'Badla' presents the story of a woman struggling to find out the truth about the murder and blackmail. The glimpses of the trailer give a sneak peeks in the gripping mystery that revolves around a murder, blackmail and no witnesses, leaving Taapsee as the main suspect.

Badla is presented by Red Chillies Entertainment in association with Azure Entertainment, Co-produced by Gaurav Verma and produced by Gauri Khan, Sunir Kheterpal and Akshai Puri, the crime thriller is directed by Sujoy Ghosh, starring Amitabh Bachchan and Taapsee Pannu in the lead roles is slated to release on 8th March 2019.