The two actors conveyed their feelings about their late actor-politician father being felicitated with the honour. 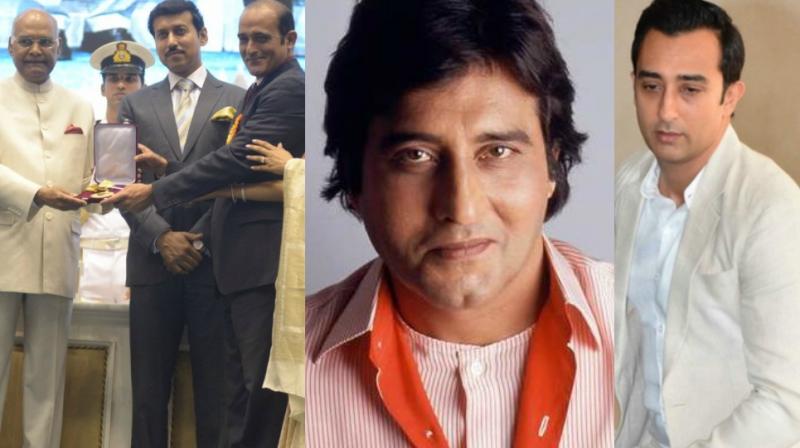 New Delhi: Actor Akshaye Khanna, who was in the national capital on Thursday to receive his father Vinod Khanna's posthumous Dadasaheb Phalke Award, said it is a "bittersweet moment" for the family.

"We are really proud as a family. It is a bittersweet moment for us. I wish my father was here to receive this award. I am missing him. It is an emotional day for us," Akshaye told PTI.

The 'Mom' star was accompanied by stepmother Kavita Daftary at the ceremony.

His brother Rahul also shared a touching tribute to their father on the occasion.

On such an emotional day—as my dad is posthumously awarded India's highest honour in cinema, the Dadasaheb Phalke Award at the National Film Awards & Akshaye accepts it on behalf of all of us—sharing one of my favourite photos of them both c. 1980!#tbt #throwbackthursday pic.twitter.com/wUvKOEbVvr

Khanna, who died on April 27 last year at the age of 70 after battling cancer, was active in Bollywood till the very end. His last few memorable screen outings were in Salman Khan's 'Dabangg' series and Shah Rukh Khan's 'Dilwale' in 2015.

Known as one of the most handsome stars ever to grace the Indian cinema screens, he started off as an antagonist and in supporting roles before graduating to lead roles.

The actor had a very successful pairing with Amitabh Bachchan. They worked together in blockbusters such as 'Amar Akbar Anthony', 'Parvarish', 'Reshma Aur Shera', 'Muqaddar Ka Sikandar', 'Zameer', 'Hera Pheri' and 'Khoon Paseena'.

He made his Bollywood debut in 1968 film 'Mann Ka Meet', which was produced by Sunil Dutt, who was reportedly struck by Khanna's good looks. He was noticed for his portrayal of Shyam in Gulzar's 1971 film 'Mere Apne', where he stood out as a disillusioned young man.

He got his first break as a hero in 'Hum Tum Aur Woh' (1971). A great many films followed including hits such as 'Elaan' and 'Mera Gaon Mera Desh.'

He made his political debut in 1997 with Bharatiya Janata Party (BJP) and served as a minister in Atal Bihari Vajpayee's government.