Entertainment   Bollywood  04 May 2018  National Awards row: I don't understand what the fuss is about, says Boney Kapoor
Entertainment, Bollywood

National Awards row: I don't understand what the fuss is about, says Boney Kapoor

The filmmaker, along with his daughters, received the award for his late wife Sridevi from the President. 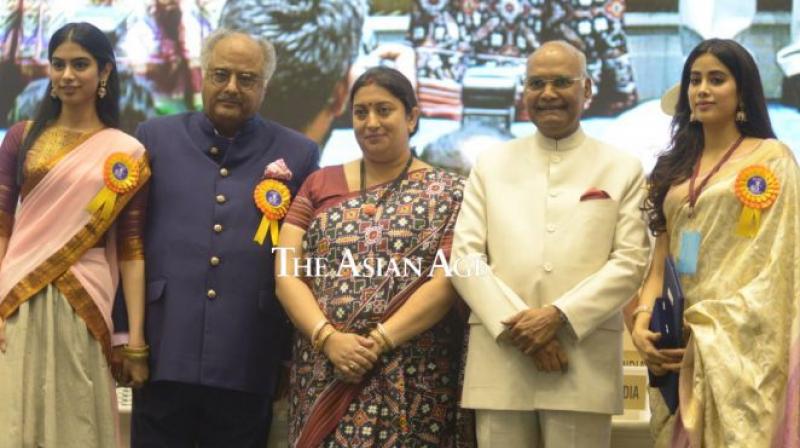 New Delhi: With the National Film Awards ceremony finding itself in the middle of a controversy, producer Boney Kapoor on Thursday downplayed the "fuss."

Talking to ANI, Kapoor said, "I would have been equally happy if the Minister of Information and Broadcasting had given me the award. It is ultimately the recognition of your work. I don't understand what the fuss is about. There is no harm in receiving the award by the concerned ministry."

More than 68 winners of the National Film Awards on Thursday decided to skip the ceremony after it was announced that President Ram Nath Kovind would be felicitating only 11 winners out of the total 137 recipients.

Information and Broadcasting Minister Smriti Irani and Union Minister Rajyavardhan Singh Rathore were entrusted with the responsibility of giving away the remaining awards.

Feeling extremely proud of his wife, he said this award was what 'English Vinglish' actress got after working for 50 years in the film industry.

"I am extremely happy and proud. This is what she's got after working for 50 years in the industry; she would have cherished this award all her life. This is the highest honour. We miss her and today we miss her even more. I would have preferred, she going and accepting the award and me and my children sitting down and clapping for her," Kapoor said.

Boney Kapoor and their daughters Janhvi and Khushi Kapoor were present to take the Best Actress award for the 'Chandni' actress.

Ace designer Manish Malhotra shared on Instagram that for the special occasion, Janhvi chose to wear her mother's sari.

Sridevi passed away at the age of 54 earlier this year.