In a freewheeling chat Sridevi talks about her upcoming movie Mom, her daughter Jhanvi and choosing to do roles that go with her age. 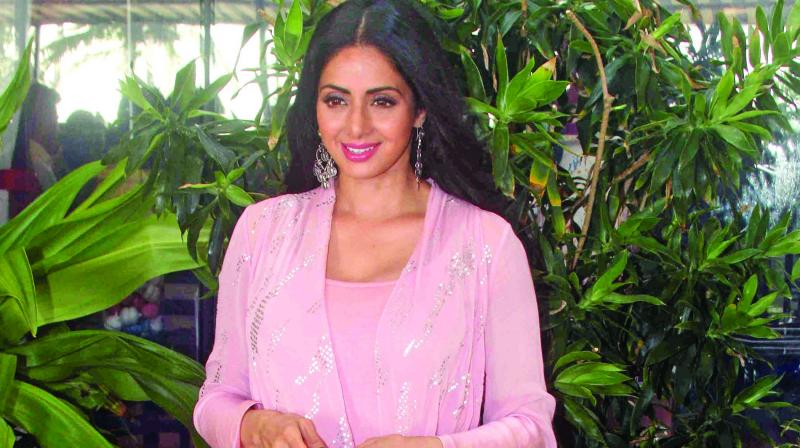 Sridevi is happy that she is getting different performance-based roles. Sri knows that her preceding image is that of a dancing diva. But the actress is clear that she wants to do age-appropriate roles, like that of the docile Sashi, who finds herself in English Vinglish.

Her next film, Mom, is based on a mother-daughter relationship and is due for release. “This character of a strong mom who always cares for the safety of her kids appealed to me. As a mother, I can go to any extent for the safety of my daughters just like any other mother would,” says Sri.

Ask her if we will see her dancing and she replies, “How can I dance now? I will perform roles, which are close to my heart. I must justify the character I play in age and experience.”

We ask if she is open to doing South films. “Who am I to decide? It is the prerogative of the director to cast any artist. If they approach me and if I like the script and my character, I will do Hindi as well as regional films. But I promise this time I will not take a gap. Actually, after the success of English-Vinglish, I was just enjoying being in that moment. We never expected it to be that huge,” she says with a smile.

Quiz her on her daughter’s debut, and she answers, “Yes, she has opted for films. Let the right time come, and Jhanvi will be the right person to talk about it. I can’t comment on her choices or decide which films she will work on. That is the director’s prerogative. I read the same news as you, but I don’t keep tabs on it.” Sans any makeup, dressed in simple casuals with her glasses on, Sri still looks resplendent. When did she first realise she was this ethereal beauty. Sri blushes. “Thank you for the compliment. During my growing years, like every other girl I too dressed up, and people would compliment me. I felt good, I guess, just like any other girl. What more do I say?” she concludes.