Post SRK's cameo in Tubelight, Salman to return favour; shoots for a song in SRK's next

Though the film has not received an apt title, reunion of these stars in this film is now definitely cemented through this song. 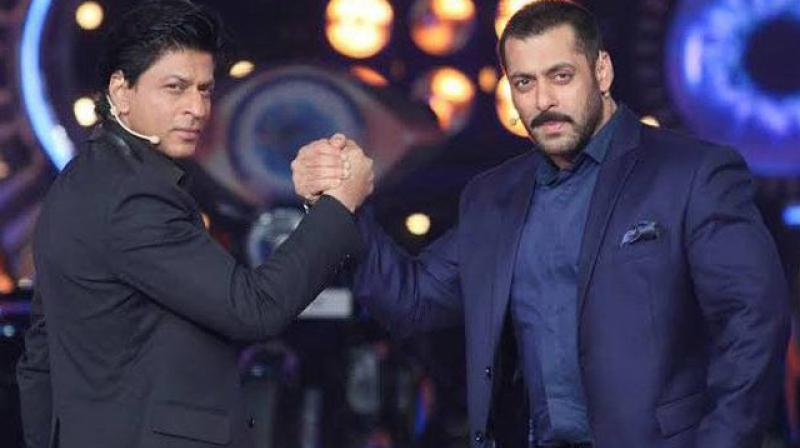 It would be interesting to see these stalwarts- Shah Rukh Khan and Salman Khan perform together in a song.

Mumbai: On the occasion of Eid 2017, Shah Rukh Khan indirectly conformed that Salman Khan will play a cameo in his Aanand L Rai’s next untitled film, where the ‘Raees’ actor will be essaying the character of a dwarf with the help of equipped graphics and visual effects. The film also has Anushka Sharma playing a mentally challenged character, while Katrina Kaif plays herself.

Giving some insights about the cameo in the film, Shah Rukh had revealed, “There is a guest appearance in Aanand’s film that I’d like Salman to consider. We are still working on it. But, I would like him to play the role.”

The latest according to a leading tabloid is that Shah Rukh’s ‘3 am buddy’ Salman will be joining SRK in Yash Raj Studios on Tuesday, July 4, to shoot a song for this untitled flick.

Meanwhile, at a promotional event of ‘Tubelight,’ when Salman was asked how did they get SRK on board for the cameo, he had revealed that it just took a phone call to lock him for Gogo Pasha’s character, and this is what Shah Rukh has to say about it. He said, “Ab mana hi nahi kar sakta, kaun mana kar sakta hai usko. Kiski himmat hai? (Who would dare say no to Salman?)”

When told that people have loved his part in 'Tubelight,' Shah Rukh earnestly said, “Thank you so much. They are all my friends, Kabir, Salman, I think it was a duty to do that and I am happy that I have done it okay because when you do a scene, like in 'Ae Dil Hai Mushkil,' 'Tubelight,' we don't know much about the story. So, I have seen my part too and I think I did a fairly good job so I am happy.”

However, the actor admitted that he hasn't yet approached his '3 am buddy' Salman Khan.

“I am going to speak to him when we get time. Salman and I only meet at 3 am, so we have to wait for the apt time,” joked SRK.

Though the film has not received an apt title, reunion of these stars in this film is now definitely cemented through this song.