The first trailer of Toilet: Ek Prem Katha came out a few months ago. 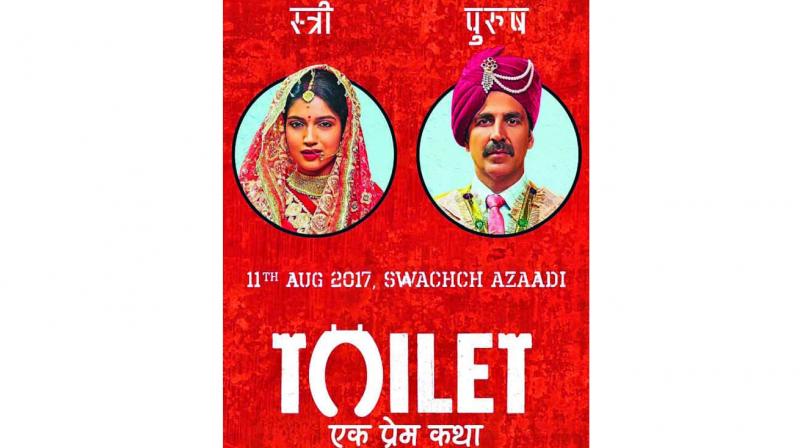 Singh has emerged from the shadows to challenge the documentary maker Praveen Vyas’ contention that Toilet: Ek Prem Katha is copied from his short film Manini.

While the producers of the eagerly awaited Akshay Kumar starrer Toilet: Ek Prem Katha are discreet about the issue of the alleged copyright infringement, the film’s young director Shree Narayan Singh has been busy.

Singh has emerged from the shadows to challenge the documentary maker Praveen Vyas’ contention that  Toilet:  Ek  Prem Katha is copied from his short film Manini.

Vyas claims there are ‘striking resemblances’ between his film and Toilet: Ek Prem Katha.

Shree Narayan Singh laughs off the allegation as nothing more than a belated attempt at arm-twisting.  “Any film on open-air defecation would have generic similarities. And Mr Vyas is taking undue advantage of those incidental similarities that he may have perceived. Luckily for us, we are very clear about this situation. Our writers  Siddharth and  Garima registered this script in 2014. Every scene that we’ve shot is in that script that was duly registered three years ago. We have the script’s registered copy at the Writers’ Association with us in hard copy, signed and official.”

Significantly, Shree Narayan points out that Vyas’ short film came out much later. “His film was uploaded on the Internet on October 19, 2016, almost two years after we registered our script. It’s therefore humanly impossible for us to have peeped into Mr Vyas’ script. And hypothetically speaking, if we had looked at his short film, how could we make a film based on his work in just the months since October 2016? Filmmaking is not an easy medium that we could finish everything from casting to shooting in a matter of days.”

Calling the legal notice from Vyas ludicrous and deliberately damaging in its timing, Sree Narayan is prepared for a long battle in court ahead.  “Mr Vyas knows this is nothing but a nuisance litigation meant to harass producers and filmmakers at the last minute. I am not going to allow my producers a dent in their pocket to silence greed. The first trailer of Toilet: Ek Prem Katha came out a few months ago. Why didn’t Mr Vyas react then? Why has he waited till just a few weeks before our film is to release?”

As we spoke,  Shree  Narayan’s lawyer was busy putting together a reply to Vyas.

“We are very sure about our intentions and the chronology of our film’s development and shooting. We thought of  Toilet: EkPrem Katha long before the  Swach  Bharat Andolan whereas  Vyas  made his short film  specifically for that crusade,” reasons  Shree  Narayan.

Initially, Toilet:  Ek  Prem  Katha was planned as the story of a newly married woman who fights for a toilet in her sasural. But then  Akshay  Kumar  came into the picture, and it became the story of a newly-married husband who is determined to build a toilet for his bride.

To every Shah Jahan, his own  Taj  Mahal,  eh Akshay?