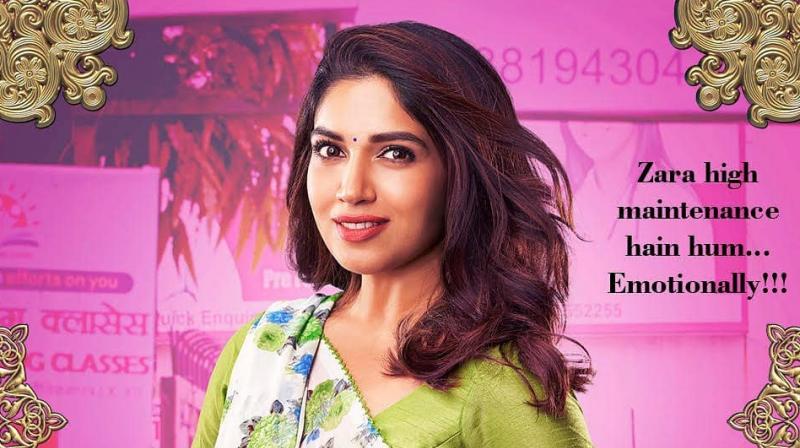 Mumbai: Bhumi Pednekar is definitely making her mark brilliantly through her choice of cinema. She has a distinct voice in Bollywood and always picks characters that tend to leave a thought behind. She plays the wife, Vedika, in the upcoming romantic comedy Pati, Patni Aur Woh and her character is a sharp contrast to the wives that we have seen in Hindi cinema over the ages.

Bhumi explains saying, “Vedika is not represented as your traditional, docile wife stereotype who is always seen prioritising her husband and his needs over hers in our cinema. She loves her husband to bits but she loves herself too and strives to achieve the balance that any modern girl seeks in her relationship/marriage. I adore that about her.“

The versatile actor adds, “Vedika in Pati, Patni Aur Woh will shatter all such age-old presentation of the wife in cinema and present a bold, young girl who is feisty, lives life on her own terms and isn’t afraid to confront her husband if needed and at the same time be his emotional anchor. I agreed to say yes to this project because it represents the modern Indian girl who doesn’t forget her self-respect and individuality post-marriage.”

Bhumi created a flutter on the internet as with her trailer as she boldly told the hero, Kartik Aryan, that she enjoys ‘sex’ - again a distinct departure from how heroines have been presented to be coy on screen and the hero is presented as the alpha male archetype.

She says, “If you see Vedika’s introduction in the trailer, even though she is clearly in an arranged marriage scenario, she doesn’t hesitate to express that she is a passionate human being. These are all very empowering qualities for any character. Vedika speaks her mind, she doesn’t hesitate to express and doesn’t care about the judgements that will be passed on her.”

For Bhumi, Vedika will always be a character incredibly close to her heart. “She loves being who is she and won’t ever compromise to become someone else. That’s what bowled me over about Vedika. She is real and extremely relatable to today’s young women and I think that’s the reason why people are connecting with Vedika in such a manner,” Bhumi says.