Entertainment   Bollywood  05 Feb 2020  Abhishek is 44: But does he really need his food cut into bite sizes?
Entertainment, Bollywood

Abhishek is 44: But does he really need his food cut into bite sizes?

Reading the gushing greetings from the Bollywood film frat, you just wonder. 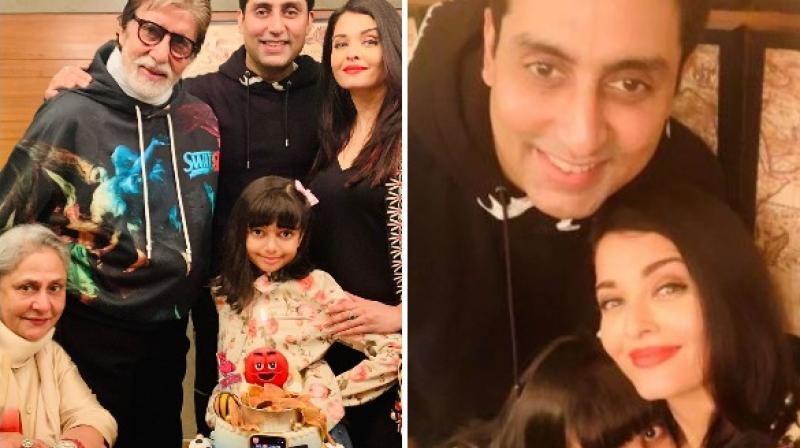 MUMBAI: He has faded a bit from films but Abhishek Bachchan remains a popular figure among the Bollywood fraternity. Wednesday Feb 5 is his birthday, and several stars sent out gushing greetings to the 44-year-old.

As you might expect, Dad Bachchan’s greetings for his son were the most thoughtful. Taking a walk down memory lane, the Bachchan Sr wrote in his blog recalling the eve of Abhishek's birth at the Breach Candy Hospital in Mumbai in 1976. Sharing his son's photo with his father Harivansh Rai Bachchan, the Big B wrote: "… the entire day went by in anxious anticipation for his arrival .. finally, it happens and there is joy and celebration .. ..in the blessings of the Dada Ji."

And he signed off with a touching remark: "No matter how the years pass the child remains a child ever .. 44 years be his age today, but the little two-finger sucking on his face ridden with childlike innocence never ever leaves you.. and may it never."

Wife Aishwarya Rai was effusive in her greeting for hubby Bachchan, replete with some pictures of an intimate family celebration at the family residence, which she posted on Instagra. The whole family was there, Aishwarya, their daughter Aaradhya, along with Jaya and Amitabh Bachchan.

In the first picture, the Bachchan family is seen posing for the camera before cutting the cake. Abhishek's love for sports reflects on his birthday cake as well. The second picture has Aishwarya, Abhishek and Aaradhya, all smiles.

Other Bollywood glitterati were just as gushing—almost. Abhishek’s Dostana buddy John Abraham posted a simple greeting on Twitter: "Happy birthday baba !! @juniorbachchan." But what took the cake was the picture, referencing their Dostana prelude-to-a-kiss scene.

Filmmaker Farah Khan Kunder was another one to give us an insight into the birthday boy’s personality. On her Instagram account, she shared a throwback picture from Abhishek's wedding day and wrote, "Looking after u since 2004 happiest birthday @bachchan I will always b fussing about u, cutting ur food into bite sizes, straightening ur shirts n smoothening ur hair.. deal with it pls."

Priety Zinta shared a funny moment from their day on the sidelines of an IPL match, "Happy Birthday to my darling fellow Aquarian @bachchan I just wanna say I love you always Wish you loads of love, happiness, success, sexiness & blockbusters Muaah ! #Birthdayboy #friendsforever #ting"

Madhuri Dixit Nene stayed polite: "Birthday greetings to you @juniorbachchan. Hope your special day brings you all that your heart desires!"

Anil Kapoor wished the birthday boy on Twitter by sharing a quirky picture of the star where he is sitting in a park sporting a football jersey. He tweeted "Happy Birthday to the always witty, kind-hearted, hilarious & my forever Bhaiya, @juniorbachchan!! May you have a great day & amazing year ahead!"

Riteish Deshmukh conveyed the birthday wishes on Twitter and wrote, "Dearest @juniorbachchan wishing you a smashing birthday- May you have a fabulous one - happiness, good health & loads of love. ...... *chestbump*..... dhudhhhh."

Incidentally, Abhishek has signed on to the latest Ajay Devgn’s production of a biographical financial crime-drama titled The Big Bull. The casting is of course a nod to Junior Bachchan signature film on a business magnate, Guru. Never one to do movies by the mass, Abhishek is also shooting for the spin-off of Sujoy Ghosh's film Kahaani - Bob Biswas.