Directed by Homi Adajania, Angrezi Medium will tell a story of Irrfan Khan's on-screen daughter who goes to London for higher studies. 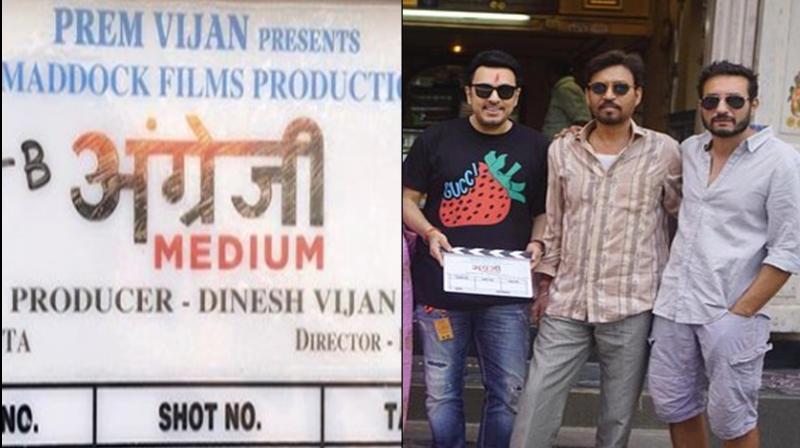 Check out the pictures here:

What better start to this Friday than starting something that you all have been waiting for! 🎬 Our power team, Producer #DineshVijan, Director @homster, DOP #AnilMehta, #DeepakDobriyal and the man himself @irrfan straight from the sets of #AngreziMedium in #Udaipur.

In these pictures, Irrfan Khan can be seen in the healthier avatar. After all, the Hindi Medium actor had returned from London last month after undergoing treatment for the neuroendocrine tumour. Hence, this is indeed delightful news for Irrfan fans.

Earlier, Irrfan had shared a heartfelt note for his fans in which he thanked them for giving him love and support. His Twitter note stated, "Maybe somewhere in the pursuit of winning, we forget how much it means to be loved. In our vulnerability, we are reminded. As I leave my footprints onto these steps of my life, I want to pause to be grateful for receiving your immense love and support, it soothed me in my process of healing. So I travel back to you, thanking you from the bottom of my heart."

Directed by Homi Adajania, Angrezi Medium will tell a story of Irrfan Khan's on-screen daughter who goes to London for higher studies. Hindi Medium (2017) was directed by Saket Choudhary with Pakistani actor Saba Qamar as the female lead.

However, latest reports stating that Kareena Kapoor Khan will be seen playing the female lead opposite Irrfan. Apart from that, 'Pataakha' actor Radhika Madan has been confirmed for the role of his daughter in the film. Angrezi Medium will be shot in Udaipur and London.