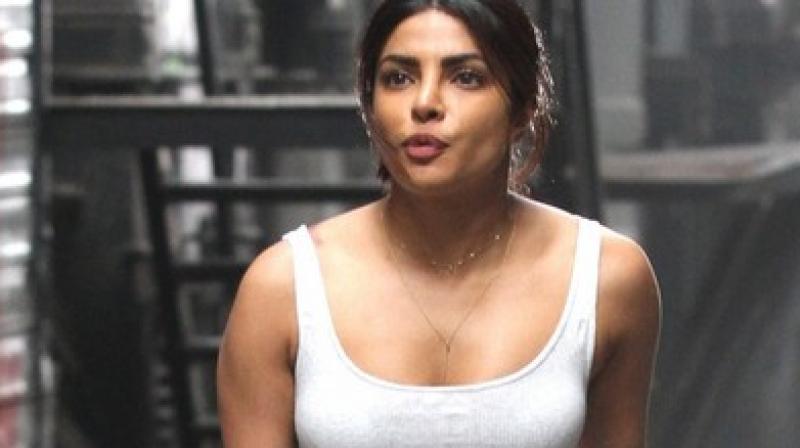 Priyanka Chopra in a still from ‘Quantico.’

‘Quantico’ will always be remembered as path-breaking for Indians, as Priyanka Chopra became the first South Asian actress to spearhead an American TV drama series three years ago.

However, Twiteratti from the country don’t feel the same anymore due to the latest episode of the ABC show.

The episode which reportedly aired on June 1 shows an MIT professor planning to target an India-Pakistan summit in Manhattan with a nuclear bomb. This was followed by ‘Indian’, Hindu to be precise, terrorists with ‘Rudraksha’ setting out for the attack with a plan to pin the blame on Pakistan.

The plot had not gone down well with some of the Indian Twitter users, who vented it out on the microblogging platform.

While some called out the makers for the ‘ploy to denigrate India’, ‘bringing shame to the country’, some were upset about equating the country with ‘Terrorists-mother country Pakistan’ and some expressed how such a plot ‘shivers our nerves.’

Apart from calling the story ‘ridiculous’, ‘nonsensical stuff’, they also slammed Priyanka by asking her to have shame on herself, while others called her money-hungry, and some referred to her recent visit to Rohingya refugees in Bangladesh and how it was in line with the show’s promotions.

One user even went to the extent of tweeting to External Affairs Minister Sushma Swaraj asking if the work permit permits her to spread propaganda against the country.

Check out some of the reactions:

Shame on #Quantico . Shame on @priyankachopra . Shame for showing HIndus as terrorists ! Shame !

Utterly disgusting step by #Quantico
A ploy to denigrate India.
A deliberate effort to project our nation in equal footing with Terrorists-mother country Pakistan.@realDonaldTrump this is not good.https://t.co/vuvaiCD6EI

What the hell was this episode of #Quantico .. they tried to show ‘Indian nationalists’ (their term) trying to blow up Manhattan to frame Pakistan.. I don’t even know what sort of ridiculous narrative was this episode trying to set.. nonsensical stuff..

If this is true then thats such a shame for all of us brought by our own. We can't blame others when our people are not standing for us. Things shown in #Quantico have never happend in past and will not happen in future too. https://t.co/DY2lZt9Cfh

In recent #Quantico episode they shown Indians are planning to blow up Manhattan just to frame Pakistan. Ridiculous !

Now i know why the money hungry @priyankachopra is supporting #Rohingyas
This #RohingyaCrisis falls in line with promotion of #Quantico
She forgot that #rohingyaskilledhindus and there would be a backlash. Time to boycott her.

What kind of stupid ass episode is this?? Indian nationals trying to frame Pakistan #Quantico pic.twitter.com/o097ecDETF

#Quantico playing India-Pakistan Game and Priyanka Chopra finds a Rudraksh! Seriously home grown things are shown on international level with Indian narratives. This is something which shivers our nerves.

I wonder if "Work VISA" issued by @SushmaSwaraj permits @priyankachopra to spread propaganda narrative via "Quantico" that Indian nationals get involved in planting bombs against a friendly nation US. VISA get cancelled for phony excuses if it's regular people @MEAIndia

The series is all set to conclude with this season owing to unimpressive ratings and we wonder if such a plot was planned so that they can draw viewers to ‘end on a high’ in August.