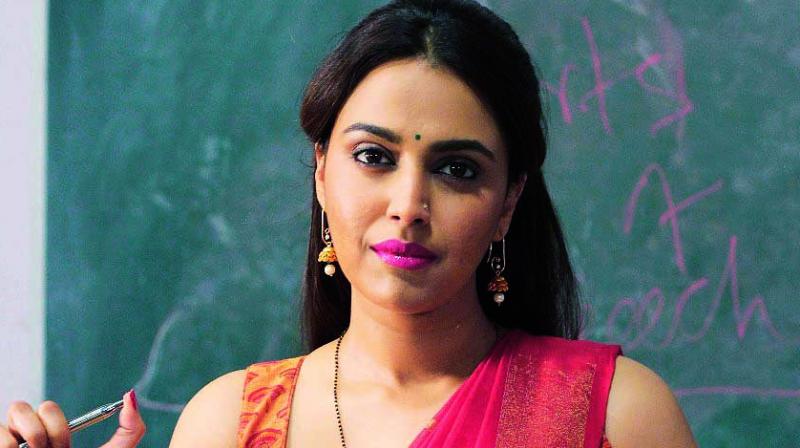 Swara Bhasker’s latest project Rasbhari, an eight-episode web series, has raised several eyebrows in the film industry as well as the general public.

The show follows a seductive teacher in Uttar Pradesh’s Meerut and touches upon issues like teenage sexuality, the stigma and shame around sex, and the archaic gender roles that still prevail in India.

Rasbhari, tells the story of Shanu (Swara), an English teacher in Meerut, fantasised by her students, their parents, and almost every man in the town!

This has not sat well with a certain faction of the public, who are accusing the show of obscenity and being anti-Indian. Swara too is being trolled over her sexually liberated character.

While she knew that doing this show would be a major risk, the actress also realised that it has a larger lesson for audiences to learn.

“When I was offered Rasbhari, I had a little idea that it could be a little risky, but when I read the entire script, I realised there is definitely more to it than just an adult sex comedy. It is an interesting story in a light mannered comedy style, but it is like making some kind of larger point. I really liked the flavour of that small town; the detailing mentioned about small towns made me fall in love with the storyline. I felt this writer must be from a small town himself. It also gives me a feeling of owning the story and the characters there. Performing a double role at a time was a sort of a challenge for me, but it puts forth an interesting challenge for me. I really like all that,” she says about the show.

Swara has never shied away from speaking her mind and criticising India’s patriarchal society and she explains that Rasbhari is also a kind of commentary on the same.

She says, “The whole show is basically a criticism of the hypocrisy that is prevalent in our society around sexuality,” she asserts, adding that the meaning of sexuality is different for men and women.

She says, “Men showing off their sexuality makes no difference to people, be it an special number, shirtless men, so-called ‘red-blooded’ men, or even men who may be into multiple affairs. We make cute films on such subjects and see such men roaming in and around our society. But no sooner does it come to making a woman-oriented story based on a similar line, then the entire pressure of society will fall on it. I am not saying extra-marital affairs are a good thing, but its standards are very different. Our show is an examination in a breezy way; it never lets go of the fun and entertainment element.”

As for the flak she has received about her character in Rasbhari, Swara has seemingly taken it in her stride.

“These trolls will follow me until my graveyard; they are, in a way, my aashiqs (lovers). But my trolls detesting me is their love in a way, they gave me so many gaalis (cuss words) about Rasbhari, that this show has now become popular all over the country. It’s like they cannot live without hearing this name Rasbhari and have painted the entire social media! So, in a way they made this name popular,” she says with a laugh, further opining that social media is being used more to dole out negativity than positivity in today’s time.

Nevertheless, she has no plans to deactivate her accounts. “I have now become a voice on social media, so it would be sad to leave the fight midway,” she says.