Veteran singer Lata Mangeshkar dead, she lives in her songs 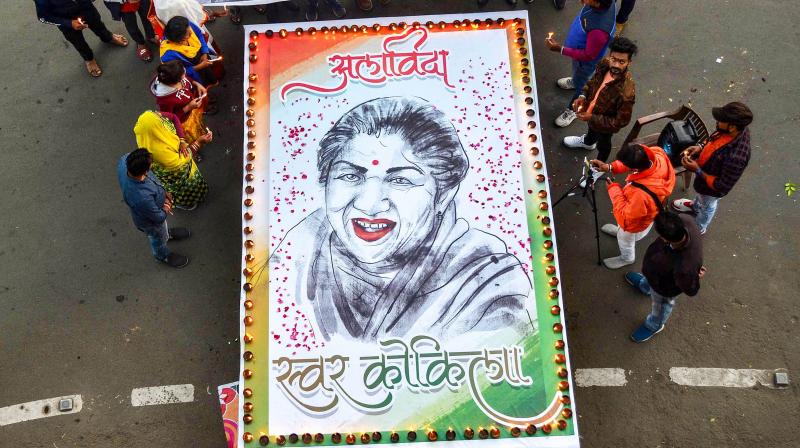 Prime Minister Narendra Modi and Maharashtra chief minister Uddhav Thackeray were among the luminaries from politics and Bollywood present at her funeral. Lata's brother Hridaynath Mangeshkar lit the funeral pyre of the singing legend. She was cremated close to where the late Shiv Sena founder Bal Thackeray was cremated.

A two-day mourning will be observed in memory of Lata Mangeshkar across the nation. The National flag will fly at half-mast for two days, as a mark of respect, said government sources.

Ms Mangeshkar passed away at Breach Candy hospital at 8.12 pm due to multi-organ failure. “She came here as a Covid patient and age were against her. We tried our level best to save the legend, but she had complications,” said Dr Pratit Samtani, who was treating her.

The mortal remains of Lata, draped in the national flag, were kept at her residence 'Prabhukunj' at Pedder Road, which witnessed a heavy crowd of Lata's fans from across India. Many diehard fans including old age people were insisting on being allowed inside the residence to have her final darshan.

The mortal remains were then taken in a truck, escorted by a military police jeep, to Shivaji Park for the last rites. A large number of people thronged the roads from where the cortege to get the last glimpse of the legendary singer. At Shivaji Park too, thousands of people waited in queue to pay homage to the singing legend.

Around 2,700 police personnel including 20 DCP and above rank officers, were part of the bandobast for the final rites.

The doyen of Indian music was admitted to Breach Candy hospital after testing positive for Covid earlier in January. The 92-year-old singer was diagnosed with post-Covid induced pneumonia. Hee health condition had deteriorated again on Saturday as she was put on a ventilator and kept under observation.

The Melody Queen of India — has been lauded with numerous awards and honours including the Padma Bhushan, the Padma Vibhushan and the Dada Saheb Phalke Award, and multiple National Film Awards. She is also a recipient of the Bharat Ratna, India’s highest civilian honour.