Watch: Golmaal Again team's pranks on each other are just too hilarious!

In a video shared on Twitter, we see the team just having an enjoyable time on the sets while shooting the film. 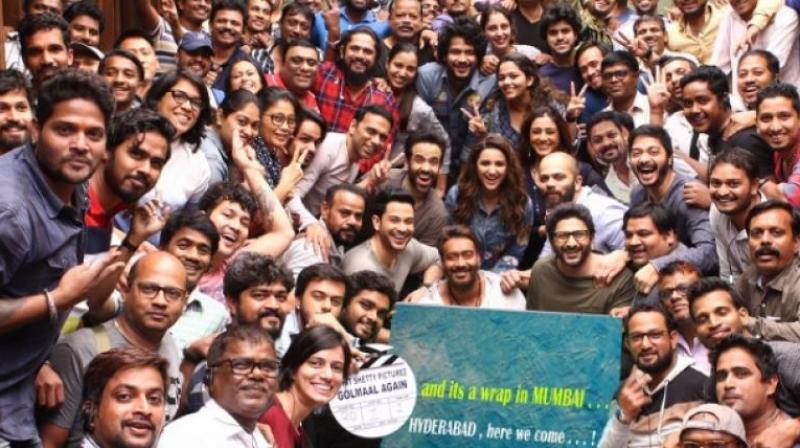 The entire cast and crew of the film while celebrating the wrap of a schedule in Mumbai.

Mumbai: When numerous actors come together to make a film, like in the case of the multi-starrer 'Golmaal Again', there is no doubt that the sets would be nothing less than a laughter riot.

The shooting of the film kicked off few days back and the cast and crew of the film are rolling on the floor laughing, literally.

As the main cast of the film led by Ajay Devgn, Tusshar Kapoor, Arshad Warsi (all four films) and other stars like Shreyas Talpade (3 films), Kunal Kemmu (2 films), others are more or less the same over four installments of the franchise, the camaraderie they share is just amazing.

Even the newcomers like Tabu and Parineeti Chopra have also joined in the fun on the sets of the film.

We see Rohit smartly slapping a photographer while he is shooting and some of the crew members jumping on others with a blanket and some even getting beaten up.

We see Ajay Devgn and Parineeti talk about how ‘mad’ the team is and we also Kunal, Shreyas and Arshad showing their excitement of being on the set of the film.

We also see Sanjay Mishra and Johnny Lever at their hilarious best during their shots.

We also see them performing hilarious sequences and failing to control their laughter after the completion of the scene.

We can also expect a similar response from the audiences when the film releases later this year.