I will act in more films, says Javed Akhtar

In a candid conversation, Javed Akhtar talks about poetry, films and the current political cloudscape. 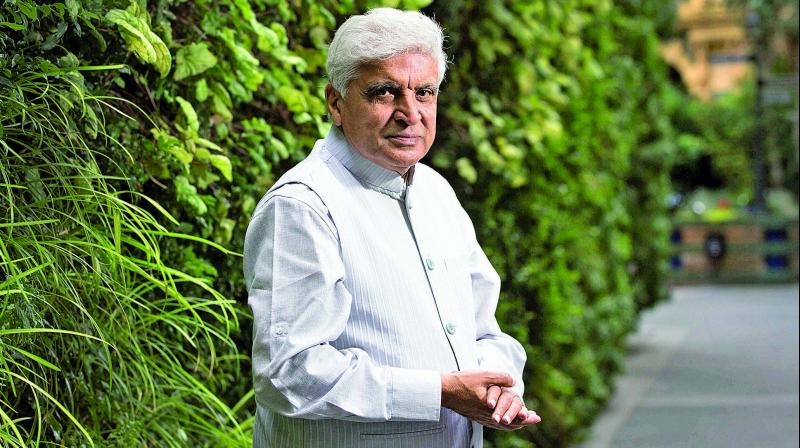 Often asked about his famous creation of the character ‘Vijay’ in the film Zanjeer (1973), the eminent scriptwriter and lyricist of Indian cinema, Javed Akhtar is now gearing up to create another victorious character— his own self in real life. After writing songs for more than 100 films, the five-time National Film Award-winning writer appears to be a grounded personality as he starts the conversation about observing possible improvements about his personality.

“I am now observing my own personality rather than thinking about any character that I have created. I think there is a lot of possibility of improvement in my own character,” says the Urdu poet, who was present at an event to distribute the royalty of over `20 crores to composers, songwriters and publishers. The lyricist has taken up a new role as the chairman of the Indian Performing Right Society.

Talking about his new task of administering the rights of musicians, composers and lyricists, the writer recalls his seven-year-long battle for the rights of poets and writers. “We finally brought this law in action after fighting for more than seven odd years. I am happy that this has been unanimously passed by the Parliament and this is the best copyright law in the world,” claims the writer. Explaining the importance of the body, he says, “This is strictly to collect and distribute the royalties from different sources where the music is performed publicly,” he explains and confirms that this is the only government-authorised body to collect the royalties.

In the changing political and social scenario where one earns the wrath of fundamentalists and trolls, the author remains an active voice on Twitter, often expressing unpopular views. “I did get some threatening messages and at times, I have received objectionable emails as well. In fact, twice in my life I have been given police protection but that doesn’t matter to me and this is a part of life,” avers the lyricist. Do you think the political scenario is strict? “It is never like a landscape, it is a cloudscape. It is immature to predict and come onto a decision before the final decision comes. My views are the same as others.”

With his illustrious career as a script and songwriter, Javed Akhtar also appeared in a brief role in Nandita Das’s film Manto and is in conversation with other filmmakers. “I will do more films and some people have contacted me,” confirms the writer.

Any role in Zoya or Farhan’s film? “I hope they give me some work. So far they have only asked me to write songs and dialogues for their films and I happily do that,” he laughs and recalls that Zoya asked him to write dialogues for a thinking dog that she featured in her film Dil Dhadakne Do, “I don’t know why she thought I am the right person to write that thinking dog’s dialogues. I hope she gives me some good role also.” However, when asked if he would like his biopic to be made and who could play his role, he quickly says, “I wish Farhan Akhtar to play my role if he agrees.” Though expressing his honest thoughts about his autobiography, the veteran lyricist confesses that it would be a boring thing to do. “Many publishing houses are approaching me but I think writing an autobiography is a boring thing. Memoirs are more interesting and I feel like writing about all the strange people I met in my life,” he reveals.

The poet’s lineages can be traced back to seven generations of renowned Urdu writers, poets and freedom fighters. Son of a famous 20th century Urdu poet Jan Nisar Akhtar, Javed Akhtar’s writing has certainly inspired millions of writers and poets. Ask if his poetry has evolved more philosophical over the years? He muses that the creators should not be too objective about their work. “I think people who create should not analyse, criticise and evaluate their own work. It is for others to decide whether it is good or mediocre and which direction it is going,” elucidates the poet and adds that people who are working should keep on working and should not think much about what they have already done.

Apart from his writing and poetry, the writer is also talk of the town for his relationship with wife and veteran actress Shabana Azmi – with whom he shares an intellectual bond. “We are friends and that’s what helps us maintain our camaraderie and intelligence,” smiles the writer. While one observes many marriages heading for separation owing to enough space and domination, the lyricist agrees that his wife too dominates him at times. “In different moments, Shabanaji dominates me and sometimes I do and we agree to each other’s views and choices because we believe in equality,” he explains. Reminded him of Shabana Azmi’s comment that being a romantic lyricist, he doesn’t have a single bone of romance, the poet quips, “People who work in the circus on the trapeze don’t hang upside down at home all the time.” However the author poetically explains that you cannot write and express the emotion that you are not familiar with. “If you don’t understand certain emotion, you can’t write and it can’t be your output if it is not in your personality. If the emotion is not there, I wouldn’t have been able to express it in my writings,” concludes the poet.