‘Media must be more vocal about nature’

Speaking on World Environment Day, Mirza, who has her own production house, said, “She was currently engaging scripts on that theme.” 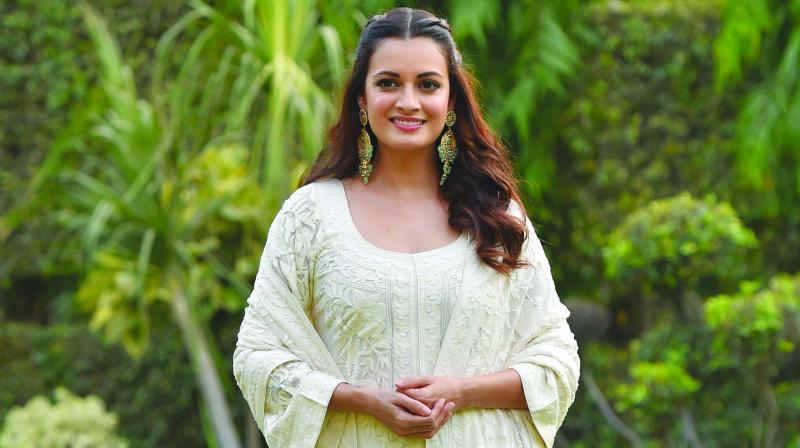 Lamenting inadequate representation of environmental causes in cinema, actor and sustainability advocate Dia Mirza today said she is aiming to produce and star in films based on such themes, as she underlined that the narrative of nature has to find a “more mainstream context” in all forms of media communication. Speaking on World Environment Day, Mirza, who has her own production house,  said, “She was currently engaging scripts on that theme.”

The actor, who was appointed the UN Environment's Goodwill Ambassador for India last year, said, while she "prided" herself in belonging to a film industry that has shown a lot of empathy for many causes and many great actors have been the face of huge social campaigns, from polio immunisation to HIV infection awareness, “there have not been many takers when it comes to environmental causes”.

“The narrative of nature has to find a stronger and more mainstream context in entertainment and all other forms of media communication. What has happened is that environmentalists and conservationists, and there are certain sphere of people who are working far removed from mainstream society.  Our consumption of mainstream communication has to start bringing nature to it,” said Mirza.

The actor-producer said that environmental causes have “not been represented enough, not just in our cinema, but cinema world over”. "There are enough central themes that can make for a very engaging and riveting view," she said. Asked if she would like to star in a film based on such themes, she said, "Not, only will I star in such films, we will produce such films.That is my intention and my aim. And, currently we are engaging scripts." Mirza, who grew up in Hyderabad, said at her Mumbai-based production house Born Free, the spirit of sustainability is actually practised.

“We don't serve packaged water bottles anywere in our office, but in jugs and glasses. On shooting sites, we don't use bottles or styrofoam-made plates. In fact, we even encourage our director of photography to not use thermocoals. So, when people see that I can do it, they also do it,” she said.

Similarly, when iconic film stars and influencers in the film industry refuse to use single-use plastic, “the message goes far and wide”.

Asked if film stars should ponder before endorsing aerated drinks, without naming anyone, she said, “They must consider the fact that they have a very large sphere of influence and if it is something that they know is detrimental to the health of people, they they should avoid doing it.”

“But, that responsibility is now reflecting more and more every day. And, many actors now refusing to do it, for this reason,” Mirza said.

The actor-environmentalist also urged people to put planet first and respect nature by rejecting single-use plastic and adopting organic and recyclable products like jute and paper. “We have to extract ourselves from the bubble that we have created around ourselves. That bubble is our work, family and personal lives. But, we have to develop this identity that we are citizens of the world, citizens of the planet, before we are the citizens of a country or the the geography that we occupy. I think that will establish a more engaged citizenship,” she said. Mirza also recalled the “emotionally painful" experience, she had while filming a TV series Ganga: The Soul of India when she travelled from the river’s source in Uttarakhand to its end point in West Bengal. “When you experience that river (Ganga), any river from its source, you see the purity and sanctity and the sacredness with which it emerges into the world and how it provides for millions of lives... And, someone told me that when rivers give waters, they dont ask your religion or the state you come from, she just gives,” she said.

“And that is so true for all things nature, nature doesn't divide, doesn't discriminate. Nature is actually the greatest democracy in the world. And, Ganga that supports millions of lives, we have treated it so badly, it broke my heart,” she recalled.  Mirza said people worship and revere Ganga as a mother, and then throw away flowers in a plastic bag into the same river. “I think there is lack of consciousness now that we have been a land of people which has respected nature as a provider,” she rued.   But, effective and consistent communication can bring about change in behavioural pattern of people, she said. “I want to go back to the 80s, wish India could go back to 80s, when life was simple. In the name of convenience humans have introduced a lot of things that is damaging our environment,” she said in a wishful thinking, when asked to recall the environmental scenario in our childhood days.