Ranveer Singh's look as Kapil Dev from '83 will leave you surprised; check out

Putting all speculations to rest about the look of the actor shared his first look as ace Indian cricketer Kapil Dev. 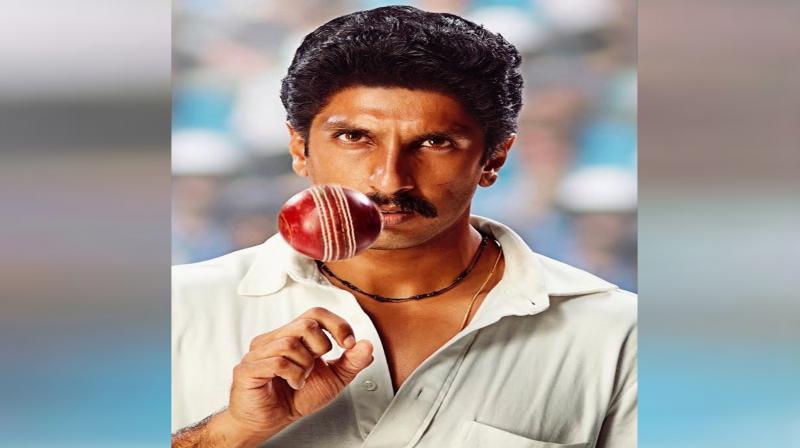 New Delhi: Celebrations turned double for fans of Bollywood's powerhouse Ranveer Singh, who rings in his 34th birthday today, as the actor treated fans with his first look from the film '83' as the "Haryana Hurricane."

Putting all speculations to rest about the look of the actor from his upcoming film, Ranveer shared his first look as ace Indian cricketer Kapil Dev.

Stepping into the shoes of the cricketer, who led team India to World Cup victory in 1983, the birthday boy wrote on Twitter, "On my special day, here's presenting THE HARYANA HURRICANE KAPIL DEV."

In the picture, an intense Ranveer, sporting in a white jersey, is seen spinning the ball, depicting an uncanny resemblance with the former Indian skipper.

As soon as the actor shared the look on social media, several stars from the fraternity were quick to congratulate the actor for the film as well as extended birthday wishes to the 34-year-old.

Aahana Kumra who was last seen in the film 'The Accidental Prime Minister' wrote, "No way!! Dayum! Happiest birthday @ranveersingh !! Greatest innings to you!!"

Indian cricketer Shikhar Dhawan complimented the actor for the look. "Looking exact like pajhi. Happy Birthday, bro. Have a great one," he wrote.

Sayani Gupta wrote, "Ohhhhhh fabbbbbbb! Damnnn! What a glorious birthday if you can and be this.. transformed! Live it up Ranveer Singh have an amazing year and a spectacular shoot!"

Meanwhile, Ranveer is leaving no stone unturned to get into his character. He was recently seen jotting down notes from the ace cricketer at his residence in London.

Giving a glimpse of his session, Ranveer shared pictures on Instagram and wrote, "Becoming the Hurricane."

Last month, the 'Gully Boy' actor had shared a video, which showed him working out in a gym and practising on a cricket pitch in the picturesque town of Dharamshala in Himachal Pradesh.

The clip also featured him training with Kapil, who was the captain during India's 1983 World Cup win.

'83' is based on Kapil Dev, who lifted the World Cup for India in 1983 and also coached the team from October 1999 to August 2000. It also features R Badree, Hardy Sandhu, Chirag Patil, Saqib Saleem, Pankaj Tripathi, Tahir Bhasin, Ammy Virk and Saahil Khattar as the Men in Blue.