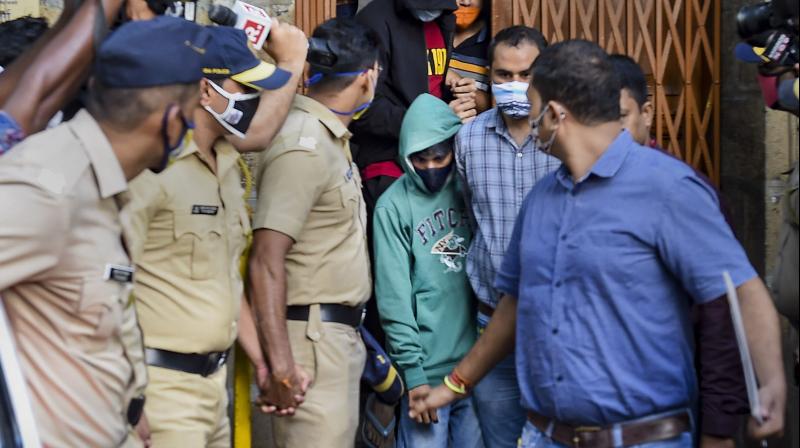 Sushant's chef Dipesh Sawant (green) being taken to court by NCB officers for a hearing in connection with death by suicide case of the bollywood actor, in Mumbai. — PTI photo

Earlier in the day, Rajput's business manager Shruti Modi, his talent manager Jaya Saha and cook Neeraj also reached the guest house in suburban Kalina, where the probing team is stationed, he said.

On Saturday, a team of the Central Bureau of Investigation (CBI) visited Rajput's flat in Bandra as part of its investigation into his death.

Rajput's cooks Neeraj and Keshav, his flatmate Siddharth Pithani and his sister Meetu Singh accompanied the team, the official said.

After inspecting the flat, the investigators went to the terrace of the building, he said.

In the last two weeks, the central probe agency visited the flat at least three times to reconstruct the sequence of events leading to the actor's death.

Meanwhile, actress Rhea Chakraborty, who is accused of abetting Rajput's suicide, on Sunday appeared before the Narcotics Control Bureau (NCB) here for questioning in the drugs case linked to the actor's death.

Rhea Chakraborty and her family members are accused of abetting the suicide of Rajput (34), who was found hanging in his flat in Mumbai's Bandra area on June 14.

The CBI earlier questioned the 28-year-old actress, her brother, father Indrajeet Chakraborty and Sandhya Chakraborty in connection with the case.

After Rajput's demise, the Mumbai Police registered a case of accidental death and recorded statements of over 50 people.

The late actor's father subsequently filed a police complaint in Patna, accusing Rhea Chakraborty and her family of abetting his suicide and misappropriating his money.

The Supreme Court last month upheld the transfer of the FIR lodged in Patna to the CBI.