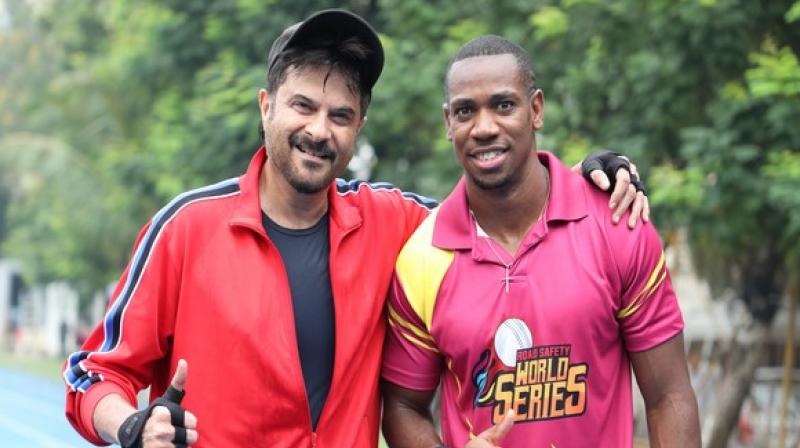 Mumbai: Yohan Blake, the Jamaican sprinter who landed in India earlier this week, met with veteran actor Anil Kapoor at his residence on Thursday. The duo vividly conversed on their fitness goals and aspirations while sprinting served as a common ground of discussion. The duo was later seen sprinting at Jamnabai Narsee School Grounds.

The 62-year-old actor is also a fitness motivator who contributed around four decades of his life to Bollywood and is no doubt one of the fittest actors in the industry. The fitness enthusiast is known to also engage in yoga, weight training, and keeps his workouts diverse and relevant. The actor's philosophy revolves around starting young to reap benefits in the long run.

'The Beast,' Blake, is on a promotional spree to create awareness towards road safety in India where around 1,50,000 people are killed and more than 4,50,000 people are critically injured in road accidents every year.

Thank you so much @yohanblake for being so inspiring, passionate & for coming and sharing your craft! It was lovely meeting you and truly one of my most memorable training sessions!

Blake who is preparing for the 2020 Tokyo Games, has collaborated with the Road Safety World Series, a T20 cricket event to be played between legends of India, Australia, South Africa, West Indies, and Sri Lanka in February 2020 in Mumbai, Navi Mumbai, and Pune.

While former cricket legends like Sachin Tendulkar, Brian Lara, Jonty Rhodes, Muttiah Muralitharan, Brett Lee, and Virender Sehwag are among the 110 cricketers to have committed to playing in the tournament. The movement is created to raise awareness about road safety.

Blake has been brought on board as the 'Road Safety Champion' of the West Indies Legends team while Sachin Tendulkar is the Brand Ambassador of the series and Sunil Gavaskar is the Commissioner of the series.