Padmavat to hit the screens on Jan 25th, to clash with Akshay Kumar's PadMan

January 25 is most likely to see the clash between two big Bollywood releases - 'PadMan' and 'Padmavati'. 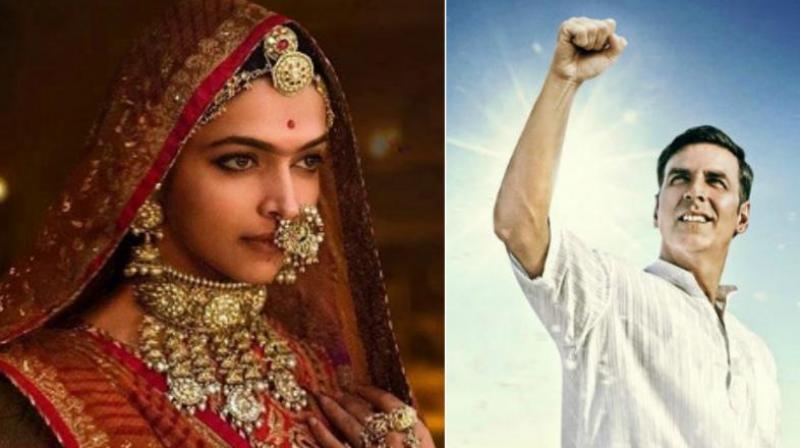 Mumbai: The makers of 'PadMan' have said the film's January 25 release date will not change amid speculation that Sanjay Leela Bhansali-directed 'Padmavat' may hit theatres the same day.

B-town is abuzz that 'Padmavat', which has been making headlines due to its plot line, is set to release on January 25 - the same day as the Akshay Kumar-starrer 'PadMan'.

Now trade analyst Taran Adarsh confirms the same with his tweet. Here it is:

The producers of the film, had earlier said they have no clue about 'Padmavat' release or the possible box-office clash between the two films.

"I am clueless what is happening... with clash. I have no idea about it. Even we have heard about it. All we know is 'Padman' is releasing on January 25," Akshay announced it officially.

"'Padmavati' is a very important film. It's a beautiful film and it should release soon. I am also looking forward to see it. It depends on Viacom 18 Motion Pictures and Sanjay Leela Bhansali Productions to decide on the date," Prerna Arora, one of the producers of 'Padman', told PTI.

Asked if the makers will push the release date of 'Padman' to avoid any potential box-office clash with the big -budget period drama, Prerna said, "We are coming on January 25."

Some reports even suggested that 'Padmavat' might come out on February 9.

"I see no sense in clashing with a big film like 'Padmavati' and harming the best release my film can get. If 'Padmavati' comes on February 9 I will change the release date of my film," Luv Ranjan told PTI.

"We are coming on February 9, we are waiting for official announcement on 'Padmavati' release date, so till then we cannot comment," said Prerna.

Viacom 18 Motion Pictures and Sanjay Leela Bhansali Productions remained unavailable for comment regarding the speculation over the release date of 'Padmavat'.

The film, which was earlier scheduled to hit cinema houses on December 1, features Shahid Kapoor, Ranveer Singh and Deepika Padukone in the lead.

Recently, the Central Board of Film Certification (CBFC) decided to give the film a U/A certification along with some modifications and suggested change of the film's title to 'Padmavat'.