Salman launched the BH 12 and the BH 27 cycles under the Being Human Brand. 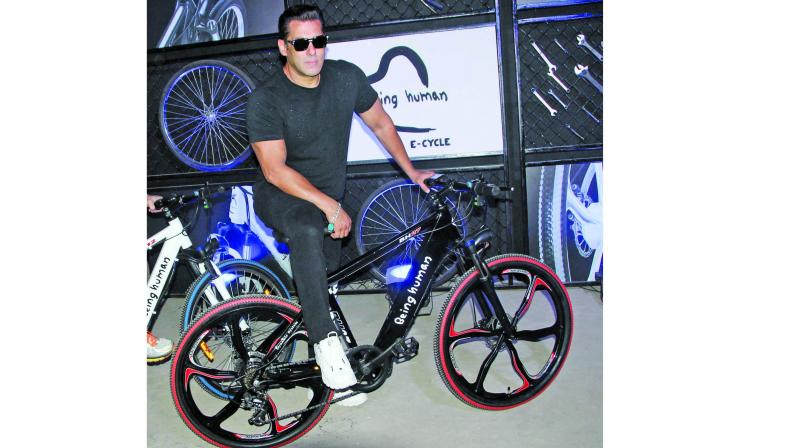 Salman Khan can sometimes oscillate between the brilliant to the ludicrous when it comes to his statements. Blessed with a good sense of humour, Salman did not realise that the joke was on him when he decided to comment on the launch of his Being Human electric cycles.

Indeed, the atmosphere was electric when the media saw Salman Khan and Sohail Khan pedal on their cycles across a busy suburban Mumbai’s Bandra roads. The public too went into a frenzy yet again when the actors cycled nonchalantly as Salman often does to his shoots, irrespective of how late he is getting to his shoot.

Incidentally, this brainwave comes soon after Salman has fired his manager-for-many-years Reshma Shetty, who used to keep Salman’s behaviour in check.

Salman launched the BH 12 and the BH 27 cycles under the Being Human Brand. And yes, remembering an old friend who was young and reckless, Salman told a story, “Cycles are okay but motorcycles are really dangerous for them (youth) and for other people around. We shoot in Film City, so I see on the highway people racing recklessly. In fact, there used to be races at the reclamation, I lost a friend of mine there. I am against that. Race karna hai to race track pe jaa ke karo. Don’t use main roads and put yourself in danger, and one innocent person who is travelling with you.”

We want to know what those people outside A-1 Bakery were doing when Salman Khan’s car careened into them killing, one and injuring four people. We are not saying that Salman was driving that car, because the court does not think so. But the Supreme Court is currently hearing an appeal by the State Government against his acquittal and is yet to decide if HC order acquitting him was right.