Saamana: You don't need a screen all the time to show your acting skills as has been demonstrated by Mahatma Sood 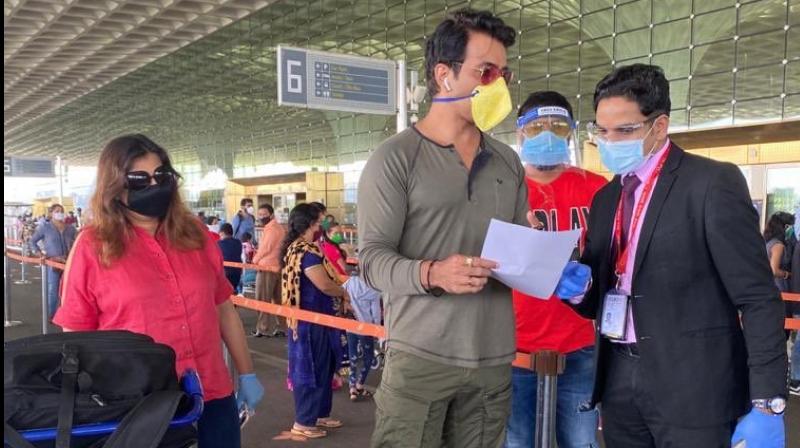 In a weekly article titled Rokh-Thok published in Saamana, the mouthpiece of the Shiv Sena, spokesperson Sanjay Raut questioned the sudden rise of ‘Mahatma’ Sood during the lockdown. He indicated that Sonu Sood is a pawn of the BJP and will likely be a star campaigner of the party in future.

Sanjay Raut said people might soon hear Sonu Sood's name in the 'Mann Ki Baat' radio programme and hear news of him meeting Prime Minister Narendra Modi in Delhi. “Sood might even visit Bihar, Uttar Pradesh, Delhi as a star campaigner for the BJP. When most of the actors were sitting at home, Sonu Sood’s acting skills were flourishing,” he stated.

He further added that the BJP has (politically) adopted Sonu Sood and tried to create an influence among the North Indian migrant workers.

The Sena leader said that the actor managed to send 177 girls in a special plane to Bhubaneshwar, Odisha. The article alleged that as the actor did not find a plane in Kerala, a special plane was flown from Bengaluru to Kochi. Without the help of the political party, government and administration, is it possible for Sood to be able to make such arrangements, Raut questioned in his article.

“You do not need a screen all the time to show your acting skills as has been demonstrated by ‘Mahatma Sood’. Sood’s political directors are experts in their field. We will come to know soon about his next political move,” he added.

Meanwhile, Congress leader Sanjay Nirupam has come forward in support of the actor. He said, “Mr Sood should be praised for helping the migrants during such trying times. The Sena failed to provide food to the migrant labourers in Mumbai and rest of Maharashtra for two and half months.”

The BJP leaders including Ram Kadam and Shubhranshu Dixit too hit back at the Sena for slamming the actor. Mr Dixit, a member of BJP Yuva Morcha National Executive, tweeted, “This is not the time to indulge in politics. Sonu Sood has done a great job by sending the migrants back home. It was the duty of the Shiv Sena-led state government to look after the guest workers. But the Sena has failed to do so. Therefore, many NGOs and citizens, including Sood have come forward to help the needy people. If you can't praise him, at least don't criticise him.”