Braving the Mumbai downpour, Salman Khan recently cycled his way to the sets of 'Dabanng 3'. 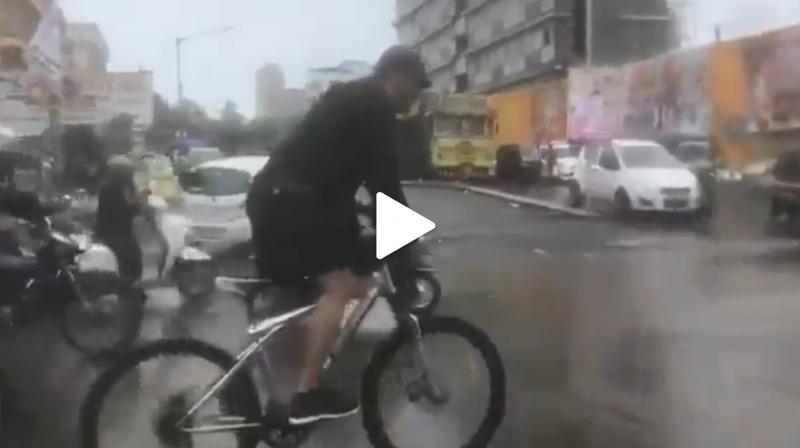 While fans are eagerly waiting to see Salman reprise his role as Chulbul Pandey in the flick, the actor is not leaving any stone unturned to wind up the shoot as soon as possible.

The 53-year-old actor took to Twitter to share a clip of him riding the bicycle on the busy road and wrote, "Mumbai city in the rains...Off to the location to shoot for #dabangg3."

Mumbai city in d rains . . Off to the location to shoot for #dabangg3 pic.twitter.com/sVY9Sa3Zdq

In April, the 'Sultan' actor shared the news of shoot's start by posting a 22-second video on his Twitter profile along with elder brother and film producer, Arbaaz Khan.

He wrote, "Back in our birthplace for #Dabangg3 shoot Arbaaz Khan." The actor kicked off shooting for the film on April 1 when he jetted off to Maheshwar, Madhya Pradesh with Arbaaz and Prabhu Deva.

'Dabangg 3' is being helmed by Prabhu Deva. The film marks the second collaboration between Salman and the director. The two have previously worked together in 'Wanted'.

As per media reports, Arbaaz will once again be seen playing Makkhi in the film. The movie is being produced under the banner of Salman Khan Films and Arbaaz Khan Production. It is scheduled to release on December 20 this year.