When asked about his favourite role, Anupam immediately picks his debut movie. 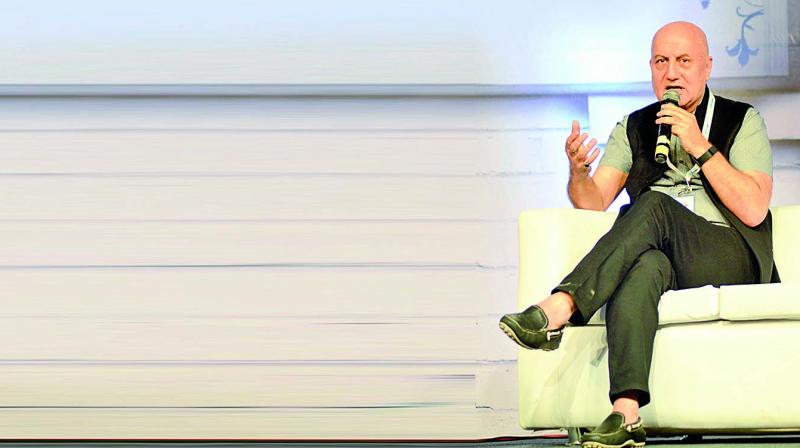 Actor-producer-director-teacher Anupam Kher, who turned 64 on March 7, spent his birthday away from home.

“I am in the US shooting for the American serial New Amsterdam. I’ve been here for two months now and have another month to go. Of course, I  miss home. I miss my mother the most,” says  Anupam who is working round-the-clock to finish his series in the US — and intermittently dining with his Hollywood buddies Robert de Niro, Armie Hammer, etc — before he returns home.

“There’s a whole avalanche of commitments waiting for my attention. And, no, it doesn’t make me weary, just more charged-up to do more work. I believe 24 hours in a day is not enough for what I want to do but I also believe any and everything can be done in those 24 hours. Saying there isn’t enough time is just an excuse. You can make time for anything that you want to do,” says Anupam who has several film projects on the anvil.

When asked about his favourite role, Anupam immediately picks his debut movie. “Saaransh, of course. 35 years ago, I played the age that I am now. I am grateful to the great Sanjeev Kumar for opting out of that project. Because of him, I got to do one of the most brilliantly written characters at the beginning of my career. There are many favourites. I love all the roles that I’ve played including those that got me flak. I am what I am today because of all the risks that I’ve taken. I am grateful for the mistakes that I’ve made. They’ve helped me better myself.”

The actor further adds, “I am first and foremost an actor. But I am a responsible actor. I don’t believe my work is over once I finish my shot. No! I have a voice and I must use it to make a  difference to society. You cannot be empowered and not use that power to help those who are not empowered.” At some point, the actor also wants to write more motivational books.

What’s his formula for a good living? “Stay fit, eat well and sleep for enough hours… Lead a disciplined life. That doesn’t mean you have to be a saint. Do everything you want to, but in moderation. I feel more energized and enthusiastic about life at 64 than I did at 24.”