Not Kangana, Shraddha or Sonakshi, Rakul confirmed as legendary Sridevi in NTR biopic

The makers have confirmed that the ‘Aiyaary’ actress is their choice for the role of the late actress. 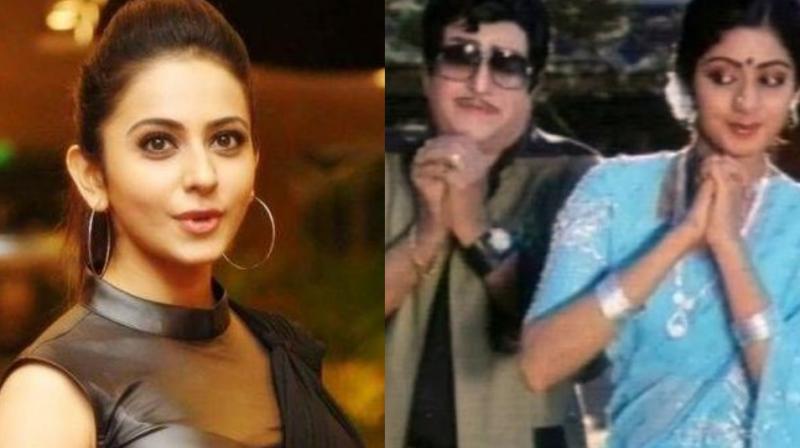 Rakul Preet Singh will surely find it hard to step into Sridevi’s shoes for NTR biopic.

After Vidya Balan was signed for the role of NTR’s first wife Basavatarakam, Rakul has been roped for the actress who worked with him in more than 14 films, which played a key role in laying the foundation of her career.

"Even though it is a small part in the biopic, Rakul is keen to play Sridevi. The makers have been in talks with her for long. Although Rakul has agreed to do the film in principle, she first needs to inform the producers of her other movies about this development. She will have to reshuffle her dates to accommodate the biopic before she can make a formal announcement about it," a source informed Mid-day.

Reports of Rakul being in contention for the role is being speculated for quite some time, but names of Kangana Ranaut, Shraddha Kapoor and Sonakshi Sinha have also been reported in the past few days.

The reasons for the new names could be the fact that Shraddha has forayed into South with Prabhas-starrer 'Saaho' and has even learnt Telugu for the film, while Kangana is being directed by NTR biopic helmer Krish in ‘Manikarnika.’

But one of the producers of the film, Vishnu Indukuri, has confirmed to the tabloid that Rakul has been finalised for the role.

"We haven't approached Sonakshi, Kangana or Shraddha. Rakul Preet Singh is our only choice as she's popular in the South, especially in Telugu films. We have shot almost 30 per cent of the movie; Vidya has already shot for six days. We are working on Rakul's dates for now," says Induri.

The actress, however, is yet to sign on the dotted owing to her busy schedule. “Rakul would love to do the role as she's a big Sridevi fan. But she hasn't discussed the details of the film yet with the team, as she's busy shooting for four films. She needs to figure out her dates for the biopic," her spokesperson was quoted as saying.