She was one of the famous politicians who was admired by common women as well as many Bollywood actresses. 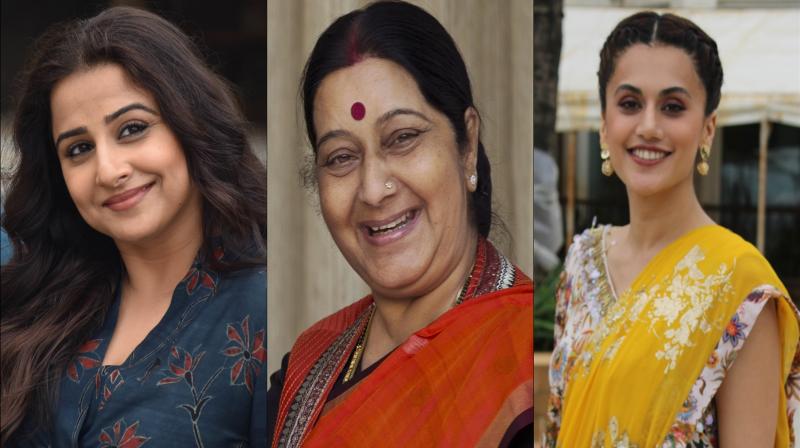 Mumbai: On Tuesday, former external affairs minister, Sushma Swaraj passed away at 67 due to a heart attack. Her sudden demise indeed shocked the world as well as Bollywood.

She was one of the famous politicians who was admired by common women as well as many Bollywood actresses. In an interview with Navbharat Times, Taapsee expressed her desire to play Sushma Swaraj on big-screen. The Mission Mangal actress said, "When I was in school, I used to stop when I would see Sushma ji speaking on TV. She was a great leader and a wonderful person. I am a fan of Sushma ji and always will be. I won't let go of any opportunity to play her on-screen. Who wouldn't want to do a biopic on such a great leader?"

Apart from Taapsee, Vidya also added by saying, "Sushmaji has been a great leader. She was strong and an excellent speaker. I met her once briefly at an airport and her influence was amazing. I have always been a fan of hers. Sushmaji's departure is a big loss for our country." For those who are uninitiated, Vidya will be seen former Indian Prime Minister Indira Gandhi on-screen. The film is based on Sagarika Ghose’s 2017 biography, Indira – India’s Most Powerful Prime Minister, the rights of which have been bought by Vidya.

Vidya and Taapsee will be seen in Mission Mangal alongside Akshay Kumar, Sonakshi Sinha, Kirti Kulhari, Nithya Menen and Sharman Joshi. The film is set to release on August 15, 2019.