When someone bares her soul don't call it circus: Kangana's sister to Sona Mohapatra 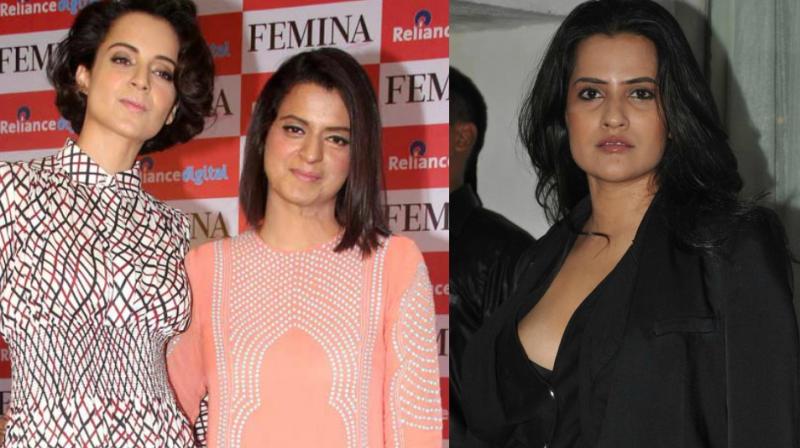 Kangana Ranaut's sister Rangoli and Sona Mohapatra are both known to raise their voices on social media.

While Sussanne Khan and Aditya Pancholi took direct and indirect potshots at Kangana, singer Sona Mohapatra penned down an open letter, saying her explosive revelations on the show were made to promote her upcoming movie 'Simran'.

While Kangana hasn't responded to the letter yet, her sister Rangoli, who is active on social media, slammed the singer and called her a "black spot on womanhood".

She took to Twitter and wrote, "When someone bares her soul don't call it circus, you are a black spot on womanhood. #shameonyou @sonamohapatra. Humn journeys can't b measurd in prerelease n post release paramtrs, ur empathy n wisdm is a slave to movie release calendr. (sic)"

When some one bares her soul don't call it circus, you are a black spot on womanhood. #shameonyou @sonamohapatra https://t.co/QOmEPpwrVi

She did not stop here and accused the singer of milking publicity from this matter.

"People like you try and milk publicity from everything please take several seats, your two minutes of fame are up," tweeted Rangoli.

people like you try and milk publicity from everything please take several seats, your two minutes of fame are up. @sonamohapatra

For the unversed, after Kangana's explosive interview, Mohapatra wrote a letter, which read, "Dear Kangana, I have always cheered loudly, in private & in public for you. Long, long before you turned queen et all but your current run across the airwaves regurgitating personal details of your love life over & over again, washing dirty linen in public & more so as part of a professional PR campaign before your film release is in bad taste. No two ways about it. Also, it does a big dis-service to the cause of feminism & fair play. Wish you well & wish you would rise above this muck & make your point through actions & your work. Your success doesn't need this tabloid trail."

No response has come from the singer's side, as of yet.