Remembering Om: A man with a golden heart

Filmmaker Shyam Benegal, worked with Om Puri in Aarohan, which earned the actor one of his first National Awards. 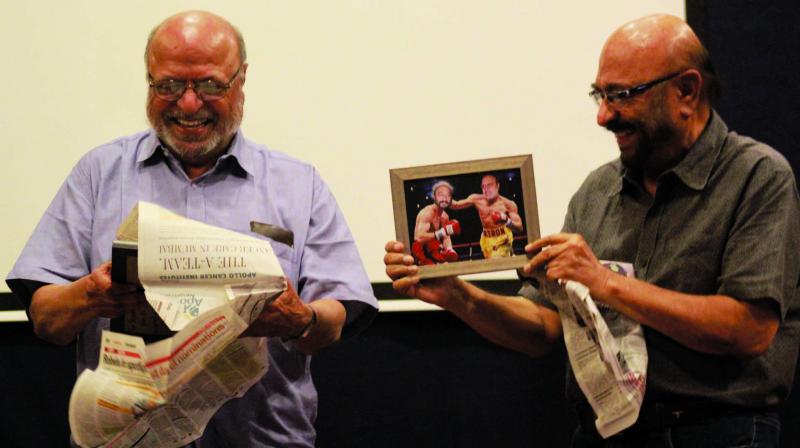 Govind Nihalani amusing at the photoshopped images of the two directors fighting in the ring. It was made by their dear friend Om Puri.

Om Puri was the “unlikely hero”, who not only became the face of Indian Parallel Cinema, but was also one of the first Indian actors to get acclaim for his international films (My Son the Fanatic, East is East). It’s been about a month (January 6) since the veteran actor gave up his ghost leaving behind wife Seema Kapoor, his son and countless of fans. On Tuesday evening, noted filmmakers and collaborators, Govind Nihalani and Shyam Bengal along with noted journalist Kumar Ketkar and actor Atul Tiwari conducted a symposium where they shared their fond memories of the man that Om Puri was. The event was orgasnied by Cine-Maa.

Filmmaker Shyam Benegal, worked with Om Puri in Aarohan, which earned the actor one of his first National Awards. “I remember seeing him for the first time. He had come with a wonderful reputation of an actor not just from the FTII but, also from National School of Drama prior to that. He really had a chameleon-like character where he could blend with the landscape and rises above the rest. It’s not an easy feat,” stated Benegal.

In the 1980 classic Aakrosh, Govind Nihalani directed Om Puri. Nihalani put a context to the times that he was born. He further added that it was the anxiety of the people that Puri represented on screen.

“The fact that he was born right after independence and grew up during the time of aspiration and eventually see it all come down during the Emergency years,” Nihalani said, “had played an important role in shaping him as an artist.” “Puri was born in 1950, the year when India got its Constitution,” pointed out Ketkar. 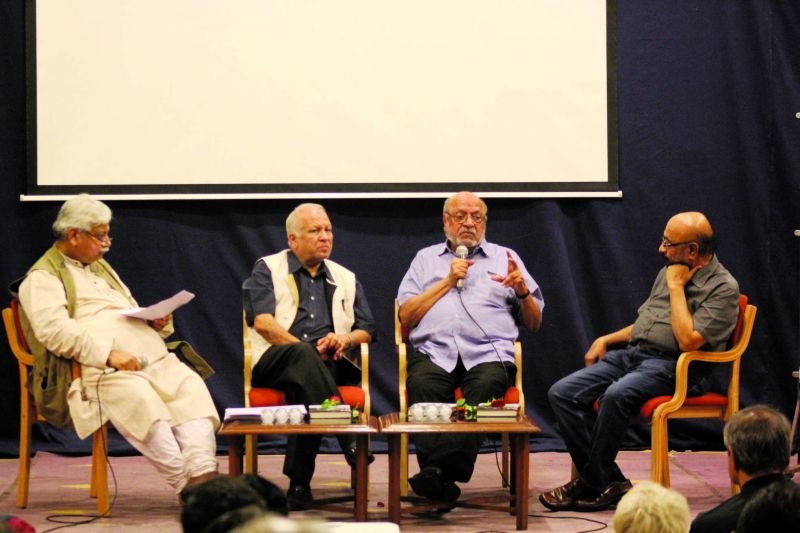 The evening had other eminent actors and writers in the audience as well. Writer Shama Zaidi said, “There was a serial called Yatra (1986), where we went on a train ride from South to North and from East to West. He would cook food for us in the train and would buy vegetable when we would halt at any station, and he kept us entertained.”

Speaking of his ways, Shyam also added instances when he would carry film equipment in Paris. He recalled, “He was like that, always wanted to work. Whenever he was not facing the camera, he would either be helping someone to hold the reflector or be busy doing something else.” Benegal added, “While shooting for Susman (1987), Benegal recalls, “He as playing a weaver in the film. We had arranged a two-hour workshop for him in the weavers’ village, but he insisted and stayed back for the entire period of the shoot. Every day, he would practice weaving while we were staying in a hotel. After the end of the film, he gave me a piece of cloth that he had weaved from which I made a shirt and a trouser and a sari for my wife,” he said. The actor was so impressed by the craft that he got the handloom in his house and would weave occasionally.

The 66-year-old actor was also fondly remembered by his friends for having a great sense of humour. As Tiwari recalled in the evening, Puri had a wall of photographs of mentors and friends oddly Photoshopped for gags.

Later, Seema handed over a framed image of Benegal launching a blow on Nihalani’s face juxtaposed on a photograph of two boxers negotiating in a ring, cracking the audience up. His wife also announced two scholarships that will be awarded to meritorious students, one at FTII and the other at NSD, the alma maters of the late actor.

But the best analogy of the evening came from Nihalani who said, “Actors should be like a great watch. It must have elegance and precision, but emit less noise of the clockwork. Om Puri was one such fine actor, whose effort would not show on-screen.”