Entertainment   Bollywood  09 Feb 2020  Will do anything for my loved one: Kartik Aaryan
Entertainment, Bollywood

Will do anything for my loved one: Kartik Aaryan

In a freewheeling chat, Kartik Aaryan talks about his forthcoming film, Sara Ali Khan and the loneliness of stardom. 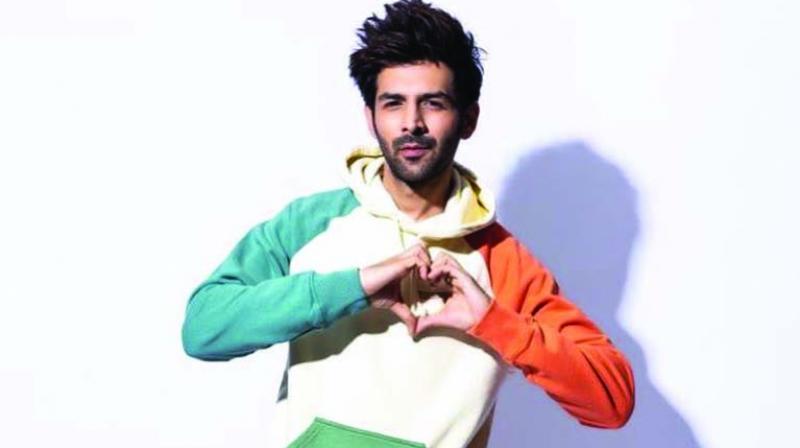 Kartik Aaryan is Bollywood’s blue-eyed boy now. Not just fans, the actor has become a favourite of directors, producers, and the industry at large. Aryan has been more in news for linkups with costars than his films. In his next Love Aaj Kal, he plays a double role under Imtiaz Ali’s direction, and teams up with rumoured girlfriend Sara Ali Khan. Naturally, he is asked about his relationship and what love means to him. “For me, love is a feeling, an emotion. It’s hard to define. If I love someone, I’ll go to any extent to make that person happy. I’ll do anything for my loved one without hesitation,” he says as he sits for chat.

What’s more important to you —  physical or emotional love?

I don’t know how it works. But in this film, I find that love is verbalised a lot. The emotional aspect of love has become very important. Irrefutably, finding true love has become more difficult. This generation wishes to have emotional love that epitomises ‘aana toh puri tareh se aana..,’ [a signature dialogue from Love Aaj Kal].

Rumours have linked you to your leading ladies. So, does news of lead actors being together helps a film at the box office?

When the rumours of our being together started circulating, we had not had signed any film together. We were not even aware that such news was spreading. I remember, our fans-clubs had come together too. It was after watching Koffee with Karan that people began anticipating a relationship between us. So, whenever we were seen attending any event together, it added credence to the rumours. The fact is that one-and-a-half year prior to today we were not doing any promotions together.

How was it working with Sara?

Sara does certain things that irritate you to the core. But the next minute, she does something that makes you forget that irritation. Watching her do two things simultaneously keeps you guessing.  When I heard her [Sara] for the first time on Koffee with Karan, I noticed her confidence. I immediately resolved to work with her. And finally, Love Aaj Kal has happened. I think both of us are excited about watching ourselves on the screen and so are the the audiences.

How difficult was it to play two different characters?

Without an iota of doubt, this is the toughest film of my career. I enjoyed playing the double role as it was very challenging. Veer is a modern boy; he expresses his feelings, both good and bad, immediately. He is an ‘in your face’ kind of a guy. But he is a very smart and idealistic guy as well.  On the other hand, Raghu is a boy from the ‘90s. He is crazy about watching Shah Rukh Khan and Salman Khan’ films. His body language is also very different, so I had to work a lot on it. Both characters were difficult to depict on screen. It is an intense love story. I feel privileged and honoured to be a part of it, Imtiaz Sir came to me with the story. He is one of the biggest directors of romantic films. He had not seen me play this kind of a character before. It felt nice to be believed in.

Are you content with the way your career has shaped up?

I am very happy with the way my career graph is rising. My films are releasing in theatres one after another, and I am being able to connect with the audiences. I have seen and learnt a lot of things in life. I have learnt from my successes as well my failures. I come from a small city and I have travelled a lot. I can relate and connect to audiences. I worry about this connection vanishing in a few years, so I do everything I can to keep it alive; I bring fresh performances as I essay different characters.

What are the negatives of stardom ?

I feel, the more you achieve success, the lonelier you become. That’s because with increased success, you lose the ability to judge between the real and the false. Being part of the glitz and glamour, you become famous, and the people you meet try to please you. But before you achieved success, you had a bunch of friends. That’s the bunch I’m still close to. To me, they’re ‘real’ because they have no ulterior motives. Not that my new friends can’t become as important as my old ones, but differentiating between true friends and fair-weather friends, and trusting in friends is tough. So yes, at times I do feel lonely.

Sara Ali Khan’s ancestry is heavily associated with both royalty and sport. Would she like to do a biopic of a historical character, a sports personality, or someone in politics?

“I would love to do all”, comes the prompt answer by the actress. “But separately!”

“Lekin, Mr.Bhansali mujhe rani banade, toh bahut maza aayega…koi bhi rani! (But if Mr. Bhansali would make me a queen, any queen, it would be great!)”

“Hmm…”puts in Kartik, “Bhansali Sir kuch banayen, toh mujhe bhi fir raja bana de! (If Bhansali Sir were to make me something too, let him make me a king.)