I feel very lucky to live and experience the real life of an item girl, says Swara Bhaskar. 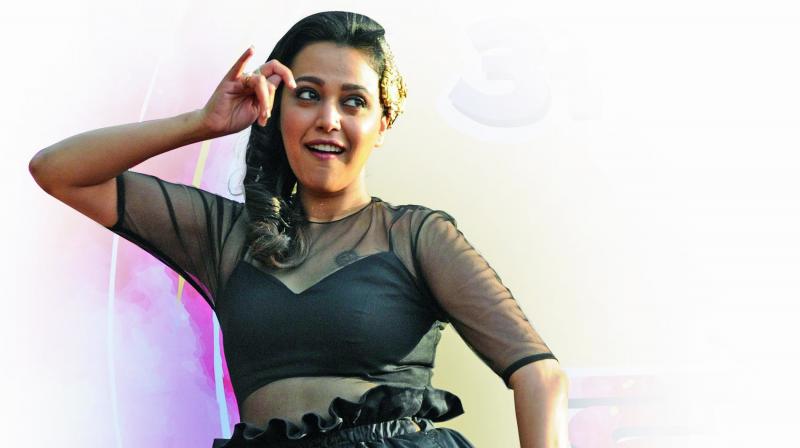 To call her ‘outspoken’ would be an understatement. She flaunts her boldness along with confidence and gratitude, which very few actresses in Bollywood have today. At 28, not only is actress Swara Bhaskar vocal and accepting to the fact that she was the last one to be cast in her blockbusters Tanu Weds Manu, Raanjhanaa and Prem Ratan Dhan Payo; she is also downright against the environment of imposing censorship by Central Board of Film Certification (CBFC).

In the city for the music launch of her upcoming film Anaarkali of Aarah, Swara spoke about her role in director Avinash Das’ debut project, her experience of playing the character of an item girl and the positive attitude with which she is progressing in the world of Bollywood.

“When Avinash approached me with the script of the film, he said he wanted to cast some other actress for the role and just wanted me to read the script. And I thought to myself, ‘pata nahi kaisa aadmi hai, actress ke saamne dusri actress ko pitch karne ke liye script suna raha hai’ (laughs). But then, it was that very time that we both went on to discuss the script for four hours. He had written more than 20 drafts of the script and I had read them all. And then he probably felt pity for me so he cast me for the role,” says Swara with a smile.

As part of preparation for her role, Swara visited the lanes of Varanasi, Aarah and Lucknow, spending time with the locals and trying to understand the life of an item girl.

“I feel very lucky to live and experience the real life of an item girl. The character of Anaarkali is just how the life of a Chikni Chameli or a Munni would be,” says Swara, adding that she, the director and producer Sandip Kapur made sure that there was no sleaziness while portraying the character.

The film, set to release in June this year, has been slapped with around 11 cuts by the CBFC and hasn’t been certified yet. Upset, Swara feels that CBFC is preying on the vulnerability of the producers. “The censor board is playing a very detrimental role in the film industry today,” she says.

While on one hand we talk about changes in Bollywood and the industry moving towards content-driven scripts, the censor board is constantly trying to create an environment of self-censorship, which according to her, “is the first sign of the society going down  the unfortunate path.”

“Before the release, it’s very difficult for producers and directors to fight with the censor board. I personally feel who are they to impose cuts on our creativity? Aren’t they supposed to state for age group the film is appropriate and give the film a U/A or A certificate?” she asks.

Such censorship and cuts even go to the extent of affecting her concentration on acting. “During the shoot of my next film Aap Ke Kamre Mein Koi Reheta Hai, I kept on thinking if we will get a U/A certificate or not. There are times when I concentrate less on my acting and more on censor board’s reactions,” she says.

Nonetheless, the actress continues to be strong-willed and unafraid of the hurdles that come her way. As an outsider in the industry, she has managed to carve a niche for herself and win Filmfare nominations (Tanu Weds Manu and Raanjhanaa).

Ask her about this positive approach in life and she says, “People who don’t have any support or strong contacts in Bollywood, have to work their way out. I’ve made my way on my own doing small roles and then bigger roles. I’ve worked my way up to the audition room. Jab kisi bade baap ka hath apne sir pe nahi hota, you develop that resilience and stubbornness in you. Moreover, one does not have control over what opportunities come their way, but one always has a control over the opportunities that they choose to take,” she quips.