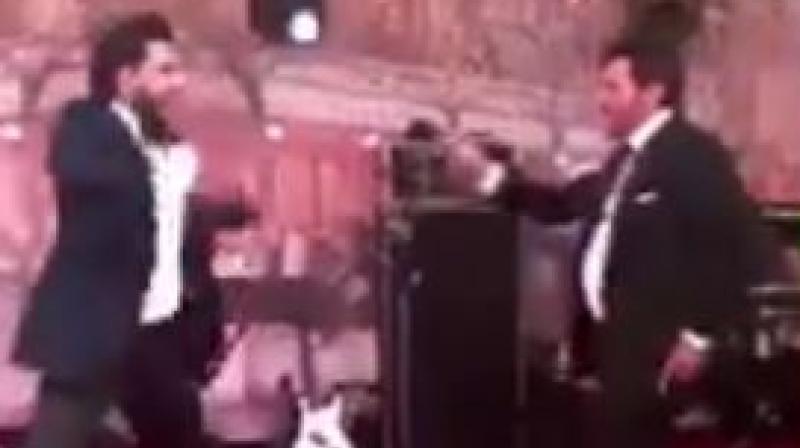 There were huge speculations about Sonam Kapoor’s marriage, but unlike unsurity over Anushka Sharma’s marriage in December, Sonam herself announced that she would get married to Anand Ahuja.

And she did finally tie the knot with the entrepreneur on Tuesday morning, amongst family and industry friends like Aamir Khan, Amitabh Bachchan, Kareena Kapoor Khan, Karan Johar, Rani Mukerji, Ranveer Singh and others.

Post that, the actress hosted a wedding reception, which saw the likes of Salman Khan, Shah Rukh Khan, Varun Dhawan, Ranveer Singh, Ranbir Kapoor and others.

Despite Ranbir’s presence at the reception party, Ranveer Singh took the stage with Anil Kapoor to groove on ‘Bachna Ae Haseeno’.

They however turned it into ‘Jhakaas’ style, by doing ‘Dhina Dhin Dha’ on the song, and ended up giving each other a hug. Watch the video here:

Ranveer Singh and Anil Kapoor had worked on the movie ‘Dil Dhadakne Do’, together making ‘Gallan Goodiyan’ a dance song that is remembered for their steps. Ranveer is also related to the Kapoor family and happens to be Sonam’s distant cousin.