Watch: Ranveer picks up groom Anand Ahuja, gets him grooving at Sonam reception

Even though he did not attend the Mehendi, Sangeet or wedding, Ranveer Singh made Sonam’s wedding reception a memorable event! 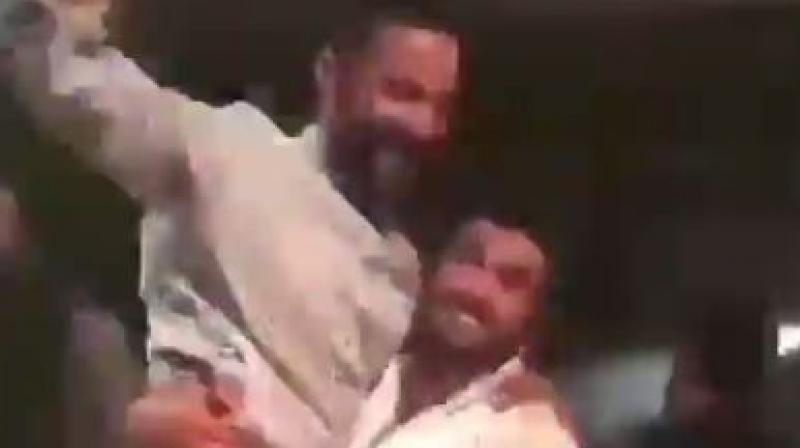 There were huge speculations about Sonam Kapoor’s marriage, but unlike unsurity over Anushka Sharma’s marriage in December, Sonam herself announced that she would get married to Anand Ahuja.

And she did finally tie the knot with the entrepreneur on Tuesday morning, amongst family and industry friends like Aamir Khan, Amitabh Bachchan, Kareena Kapoor Khan, Karan Johar, Rani Mukerji, Ranveer Singh and others.

Post that, the actress hosted a wedding reception, which saw the likes of Shah Rukh Khan, Varun Dhawan, Ranveer Singh and others.

Ranveer, who expectedly was the highlight of the party, started grooving from the DJ arena itself, along with Badshah.

Co-incidentally, the groom of the night Anand Ahuja, who was right behind the DJ studio, also showed off some of his moves. Watch the videos here:

In fact, Ranveer ended up picking him in the middle of the song ‘Jumme Ki Raat’, but the excited groom kept on jumping and dancing all the time. See it here:

Even though he did not attend the Mehendi, Sangeet or wedding, Ranveer Singh made Sonam’s wedding reception a memorable event!