The Kapoor trio sought blessings at the Andhra Padresh temple as Janhvi’s 'Dhadak' gears up for release. 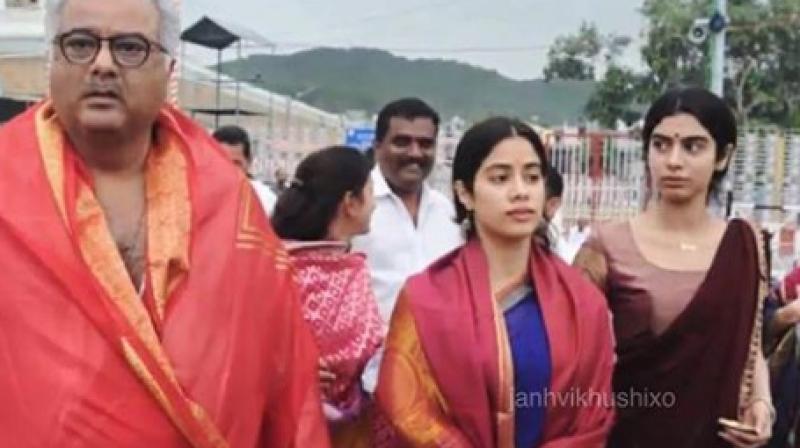 Mumbai: With only about 10 days to go for ‘Dhadak’, Janhvi Kapoor might be feeling the jitters ahead of her debut.

And as in the norm for some Bollywood stars who visit temples, Ajmer Dargah or Golden Temple before release, the soon-to-be-debutante sought blessings at the Tirumala Tirupati temple in Andhra Pradesh on Sunday.

She was accompanied by her father, producer Boney Kapoor and sister Khushi Kapoor.

Dressed traditionally in South Indian style, we see the trio posing for the cameras on their way out in videos which have surfaced on social media.

Incidentally, even in ‘Dhadak’, she is largely seen in traditional outfits, though her choice of western clothes as clicked by paparazzi and at events have got people tipping her to be a potential fashionista.

This is the family’s second trip down South this year, the first one was when they immersed the debutante’s mother, legendary actress Sridevi’s ashes at Rameshwaram river in Tamil Nadu.

Janhvi is currently in the midst of constant promotions for the film which has been generating buzz since the release of the trailer and the songs like ‘Zingaat.’

She is paired opposite Shahid Kapoor’s half brother Ishaan Khatter, who had made his debut with Majidi Majidi’s ‘Beyond the Clouds’ earlier this year.

‘Dhadak’, the official adaptation of Marathi blockbuster ‘Sairat’, is being helmed by ‘Dulhania’ franchise hitmaker Shashank Khaitan and is produced by Karan Johar’s Dharma Productions and Zee Studios. It hits the theatres on 20 July.