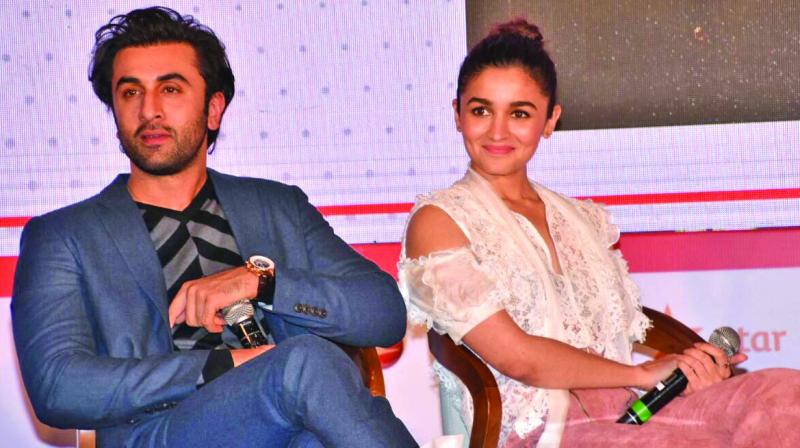 Ranbir Kapoor and Alia Bhatt, both products of famous film families, spoke from their heart at a film festival in Mumbai. Not many are aware that Ranbir’s great-great grandfather and Prithviraj Kapoor’s father Dewan Basheshwarnath Kapoor was also an actor, something that even Ranbir didn’t seem to know. He started with Prithviraj Kapoor’s reference. Ranbir stated, “My great grandfather worked hard and made a place in the film industry so that he could give his children an opportunity; so they could do something in their life so on and so forth. Now when I have children, I would I would like to give them an opportunity where they have something to do.”

The Barfi! actor went on to recall his father Rishi Kapoor’s words. He said, “You know, my father once said that politicians and actors are chosen by the public. You may get your first film, you may get your first campaign but unless the public likes it, you won’t be a star, so I believe that. Yes, I’m a product of nepotism and I don’t shy away from it. I know I got the opportunities easier than anybody else. I am grateful and I don’t want to take advantage of it.”

Alia’s grandfather, Yeshwant Bhatt, popularly known as Nanbhai Bhatt, had made over 50 films as a director, as much as what Alia’s father Mahesh Bhatt himself has directed. But Alia till date has not worked with family. “I am aware that my connection with my family has made it way easier for me,” she stated, adding that she has been giving her hundred percent to justify her lineage. “The only thing that bothers me about nepotism is that it definitely it exists; it exists in Bollywood; it exists in the business world, it exists in school, it happens everywhere. I love my work and I give it a hundred per  cent. I work hard because I don’t want to feel apologetic for being where I am today. Neither do I need to feel apologetic for being my father’s daughter because I love my father,” was Alia’s refrain at the event.