Entertainment   Bollywood  09 Oct 2017  Why 'no means no' only applies to a woman: Hrithik on Kangana row
Entertainment, Bollywood

Why 'no means no' only applies to a woman: Hrithik on Kangana row

From talking about accusations of infidelity being responsible for his divorce to impact of the controversy on his kids, revealed it all. 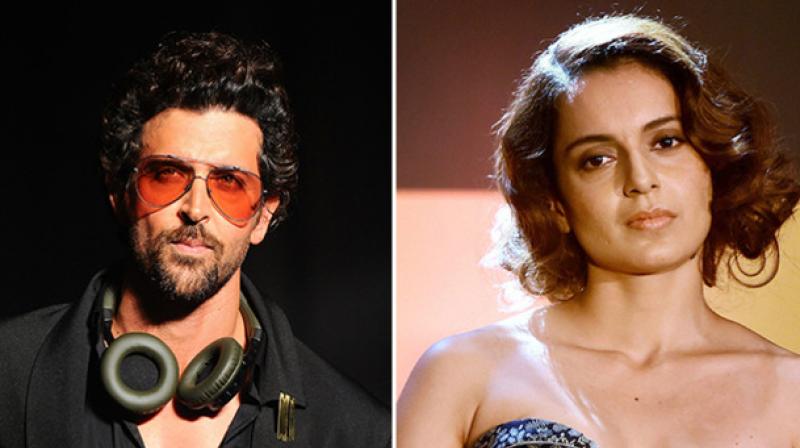 Mumbai: After Kangana Ranaut's series of interviews on her row with Hrithik Roshan during the promotions of 'Simran', even the latter seems to be on a spree of statements or interviews on the controversy.

After more than a year’s silence on his row with Kangana Ranaut, Hrithik has decided to open up and clear the air surrounding the controversy.

While the actor had communicated only through legal notices till now, he chose to break the norm with his first-ever social media post, followed by a TV interview.

After his comments on an interview with Arnab Goswami on Saturday went viral, the actor also spoke to with CNN News 18’s Bhupendra Chaubey on Sunday.

During the interview, the actor revealed that despite being claiming that he's been harassed for four years, there was only one instance when he broke down.

Popular dairy brand Amul is known for its interesting cartoons on various current topics, but the one on the Hrithik-Kangana row didn’t go down well with the ‘Kaabil’ actor.

He said, "The only time I actually had tears in my eyes was when I saw this huge Amul hoarding with my brand Krrish, which is something that is built by me, it is like my baby. And that brand was completely demolished on that visual. And it said something like Krrish being run out, being caught stealing some cheese or something. That was probably the only day when I felt that this is not right."

He further said, "I date it back to my first film Kaho Na Pyar Hai when the same Amul hoarding had me up and called me a phenomenon. And I just watched the entire journey and I said, 'You know, I have to find a way to detach from the hoarding that said I was a phenomenon and I have to find a way to detach from the Amul hoarding that is making me look like this disgusting creep. I really need to find what I think of myself as my identity. And I need to work on that. And I need to make it so strong that I can be bullet-proof against any perceptions from the outside world. That is a failing from all of us. We build our identity with what others say about us. That is how we have been brought up. Your parent tells you you are strong, you are strong. This was a fantastic lesson for me. Hard one, but to be walking into a party all by myself and still be able to contribute to people, make people laugh, spread positivity while they are looking at the hoardings and judging me."

Hrithik’s friend, actor-director Farhan Akhtar wrote an open letter in support of him on gender discrimination when it comes to accusations made by a man against a woman as compared to a woman against a man.

And Hrithik also reiterated it on the interview, he said, “The movie Pink inspired and affected me so much. But it also got me thinking, why 'No means No' only applies to a woman?”

Hirthik got divorced from his ex-wife Sussanne in 2014, but the actor denies that his alleged affair with Kangana was the reason for it.

He said, "Absolutely not. Sussanne has been very very vocal about this. She has been very vocal. And I feel like laughing at people. When people get divorced, it is not always because of infidelity by the man. That is just such a small-minded assumption. I am just trying to say that there are many reasons why people would like to live separate lives. Infidelity is just one of them. So the general assumption was, 'Ah he is the superstar, he must have done something wrong. She must have caught him.' That is not the case. We are great friends. It is between us. The reason that we decided to live separately may have been an inspiring reason, how do you know?”

He also revealed that the controversy also affected his sons Hrehaan and Hridhaan.

"I am being harassed as a father.  I have kids going to school who may be teased and I am not okay with it."

He added, "People are saying that these two people are washing their laundry in the public. But it's not my laundry!"

With Kangana usually being very prompt in her responses, be it through legal notices or statements through her lawyer, another sensational claim from her side is very much on the anvil.