Entertainment   Bollywood  10 Jul 2018  Big B is on fire with captions as he spends time with ‘best' grandkids Navya, Agastya
Entertainment, Bollywood

Big B is on fire with captions as he spends time with ‘best' grandkids Navya, Agastya

The veteran actor on Monday took to social media to share pictures of him spending quality time with family. 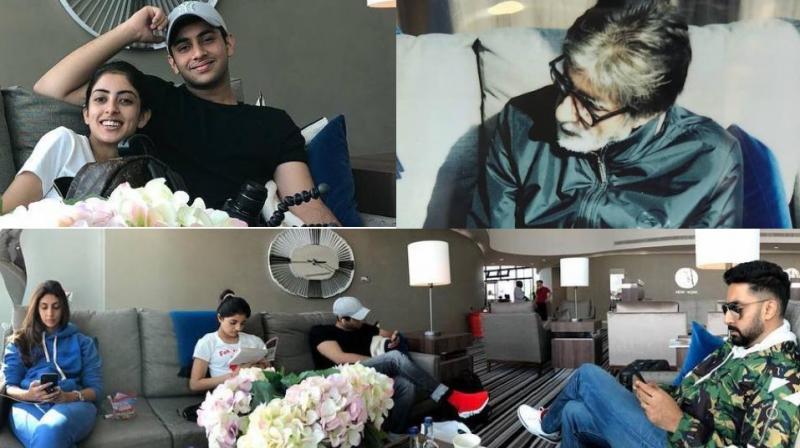 Pictures shared by Amitabh Bachchan of his grandchildren and kids.

New Delhi: Megastar Amitabh Bachchan has often posted loving pictures and captions for 'apples of his eye', his grandchildren.

Big B on Monday took to social media to share some pictures of his day in which he can be seen spending quality time with Navya and Agastya Nanda.

Posting a Polaroid photo of himself, the 75-year-old wrote, "When Navya clicks you on her Polaroid and you click yourself on your iPhone .. as we chill .. for .. Aahaa .. wouldn't you like to know ..!!"

He also shared an adorable picture of Navya and Agastya, writing, ".... and then the grandchildren.. they be the best .. when did they grow up - Navya Naveli & Agastya .."

And when he spotted his children Abhishek and Shweta and Agastya using their phones at the same time, he wrote, "The family that Mobiles together, stays together."

... the family that Mobiles together, stays together..

The 'Brahmastra' star, along with children Abhishek Bachchan and Shweta Bachchan-Nanda and grandchildren Navya and Agastya, are currently holidaying in Russia.