Ahead of Hrithik Roshan's Super 30 release, Anand Kumar reveals he has brain tumour

The Indian mathematician made a shocking revelation as to why he wanted the film to be made as soon as possible. 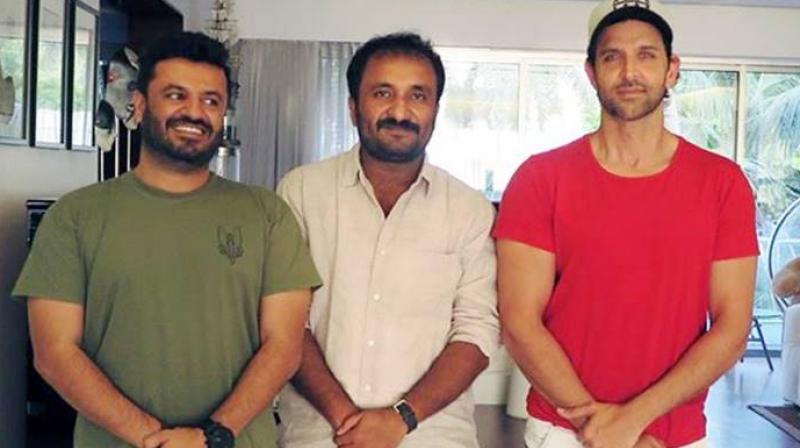 Vikas Bahl with Anand Kumar, the mathematician on whom ‘Super 30’ is based and lead actor Hrithik Roshan.

Mumbai: Just ahead of the release of the biopic 'Super 30' staring Hrithik Roshan, Indian mathematician Anand Kumar made a shocking revelation as to why he wanted the film to be made as soon as possible.

The mathematician who is suffering from acoustic neuroma, a non-cancerous tumour on the main nerve leading from the inner ear to the brain, wanted to witness his works and journey while he is alive.

Talking about his health and problems he is facing, Anand said, "The film writer's wanted that I permit for the film as quickly as possible. You have no idea of life and death, so I wanted this biopic to be made while I am alive."

Elaborating more, he further added, "In 2014, my situation was such that I was unable to hear from my right ear. I underwent a lot of treatments in Patna and it was after some tests that I came to know that 80-90 per cent of the hearing ability of my right ear has been destroyed."

"Then I checked into Ram Manohar Lohia Hospital, Delhi and the doctors performed rigorous investigation and did a number of tests. They then called me and told that I had no issues in my ear instead a tumour had been developed in the nerve which runs from ear to brain. And as soon I got to know this, as I lost consciousness," he added

The mathematician said that none other than Hrithik could have done justice to the film with his sheer dedication and hard work towards the character.
Sharing excerpts from the practice sessions, Anand said, "I made sure that till the time I am alive, my journey should be narrated in a right manner. So for that I read the script 13 times so that nothing goes wrong."

Hrithik sir is a great star and I used to communicate with him daily. I remember he made a 150 hours video about my daily life including how I interact with people in Patna, going out with my children and all, and he thoroughly tried to practice my style by watching it."

"We used to sit together and go through the script. He used to ask wquestions about my life, circumstances I faced and what not for better understanding of the character. Once I remember that he was so engrossed in listening to my story that when he came downstairs of his apartment to drop me, he forgot to wear his slippers. So this just defines how serious and passionate a person is towards his craft," he added.

Hrithik's upcoming biopic is one of the highly anticipated films of 2019 which chronicles the story of Anand Kumar, an Indian mathematician who quits his job as a teacher in a top coaching center attended by rich students, to dedicate his time into teaching underprivileged children.

Directed by Vikas Bahl, the film will hit the theatres on July 12.